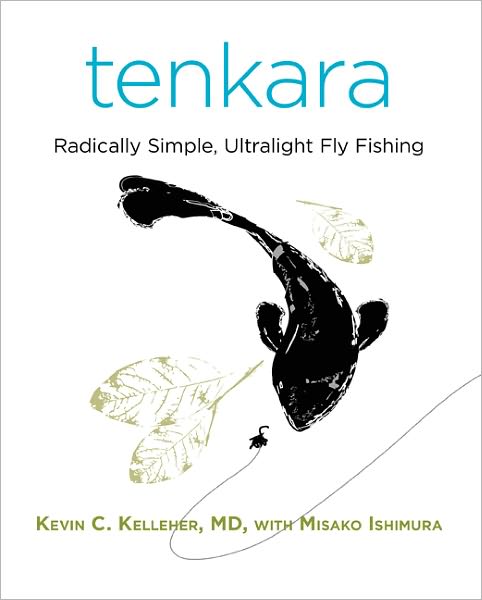 I recently read Tenkara: Radically Simple, Ultralight Fly Fishing by Kevin Kelleher, MD and Misako Ishimura and just wanted to post a few of my thoughts on it.

First off, this is the first book on Tenkara fly fishing written in English and represents a milestone for the Tenkara-mania that seems to be spreading across the U.S.  At 133 pages (not the 160 pages Amazon states), it’s a quick read.  I was so excited to read it that I finished it in less than 2 hours at a noisy Starbucks!  Multiple lattes helped.

Overall, the book is very well written and I would recommend it to anyone interested in getting started in Tenkara.  It covers everything from the history of Tenkara in Japan to the specifics of gear, terminal tackle, and casting techniques.  If you’re already a Tenkara fisher and have done a significant amount of research on the web, you will probably already know most of the information in this book but it’s still an interesting read.

Yet this book also caters to beginning fly anglers in general, tackling such topics as basic entomology and reading water.  So it could serve double duty as a primer for current Western fly anglers thinking of trying Tenkara as well as people without a fly fishing background looking to make their foray into fly fishing via Tenkara.

I think this book is a good and important first step in building the inevitable English language body of Tenkara literature, but personally, I’d like to see it taken to the next level.  I would love to see a follow up book (or perhaps series) exploring more advanced aspects of Tenkara fishing.  Also, in the second addition, I would like to see the text reinforced with more visual information (i.e. charts, diagrams, photos, etc.).  While the explanations are good, certain things really need to be shown visually to be clear (the section on how to make a furled line, for example).

Again, this is a great read and I applaud Dr. Kelleher and Ishimura-san for taking the initiative and doing all the hard work to come out with the first (sorely needed) English-language book on Tenkara.  Will it be the authoritative Tenkara Bible?  Probably not.  But it’s a good place to start.

Have you read Tenkara: Radically Simple, Ultralight Fly Fishing?  What were your thoughts/impressions?﻿