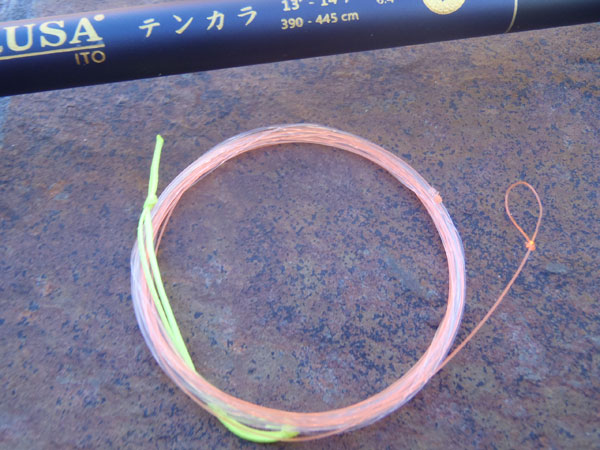 That’s not a typo.  We talk a lot about “Hi-vis” line in tenkara but this one really is a “Bi-vis” line because it’s actually two colors. The first two thirds are clear fluorocarbon while the last third is hi-vis fluorocarbon.  It all started during a conversation with Karel from Tenkara on the Fly.

One day, Karel mentioned to me that he was thinking of making a level line that only had the last section of the line use the Tenkara Bum Orange level line.  The rationale was that you really only need to see the end of the line to detect strikes, so why make the entire line out of the relatively expensive high-vis stuff when you could use cheaper fluorocarbon for the majority of the line, and just put the hi-vis line at the end. As someone who goes through a lot of Tenkara Bum line for experiments, my ears definitely perked up and I just had to try the idea.  Here’s how it works…

I’ll use the 15 ft. line in the picture above I created specifically for my Tenkara USA Ito, but you could adjust the lengths depending on what kind of rod your using and the level of visibility you want.

The first 10 ft. is just el cheapo Stren clear fluorocarbon.  On the end that attaches to the lilian, of course I added my dacron girth hitch connection.  Then, I connected 5 ft. of Tenkara Bum orange fluorocarbon to that using a blood knot.  At the end of the hi-vis section, I tied a simple surgeon’s knot to connect my tippet with a loop-to-loop connection.

The line was pretty easy to make and after test casting it in the backyard, I’m pretty pleased.  I can see the last five feet of the line very well and it casts the same as if the entire line were made of the hi-vis fluorocarbon.  This means I can now use 1/3 less of the rare orange fluorocarbon by putting it only where it really matters and use the cheaper Stren to form the rest of the line.

In case you’re wondering, I used Stren Fluorocast 12 lb. and Tenkara Bum #4 level line–both with a diameter of about 0.013″.  I will be experimenting with different diameters and lengths just to see which combinations work best.

If you make a lot of tenkara level lines and like to experiment as much as I do, you might find this design to be a little more economical. While it’s certainly nice to have the entire line be hi-vis, I think it’s definitely not necessary.  The end of the line is really the most critical part when it comes to visibility.

So, I have to give Karel pat on the back for this one.  I think it’s a simple, yet great idea that is worthy of more exploration.  If you’re willing to take a little time to pre-make a few lines before you hit the stream, the Bi-vis tenkara line is a good one to try out.

Learn from the Bruce Lee of Tenkara
May 11, 2015
19 Comments
Leave Comment