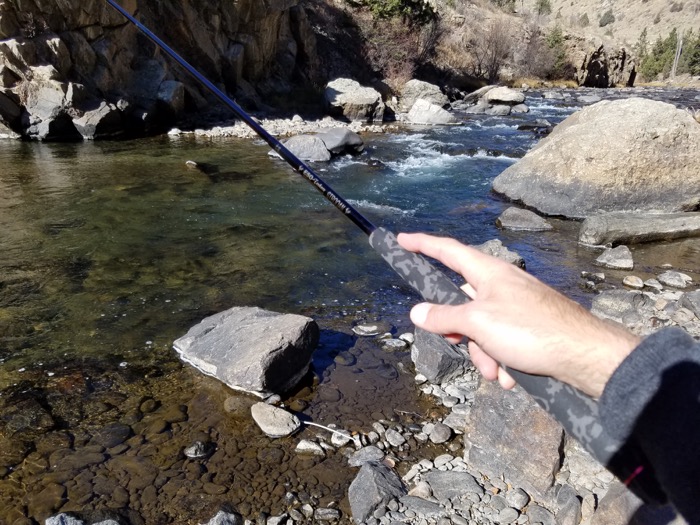 Zoom rods are becoming more and more popular in tenkara these days due to their versatility and their ability to “dial in” the action to one’s liking. They’re versatile because they can adjust from one to two or three different lengths allowing you to reign in the rod tip in tighter quarters, and then “zoom” the length out when you need a little extra reach. And their action is “customizable” in the sense that the different lengths change the personality of the rod by redistributing the mass and flex points to pander to each individual casting style. On any given zoom rod, some will prefer the first or second positions, while others will prefer the second or third. It’s all a matter of courting your personal cadence.

I recently had a chance to fish the new Strooan zoom rod from Esoteric Tackle. This is a triple-zoom rod that adjusts to the following three lengths:

Many zoom rods (especially double-zoom rods) only vary mere inches between their longest and shortest positions and don’t really make a significant difference in terms of diminution vs. reach. But with a span of nearly a yard, the Strooan does. Not only that, but somehow, it doesn’t feel tip heavy when extended out to the longest position which (in my experience) seems to be the Achilles Heel of zoom rods in general.

Instead, the rod is a pleasure to cast even at the full 12′ length without adding any fatigue to the arm or wrist (though I still prefer the shorter first and second positions because of the slightly softer action and haptic feedback).

Whatever your casting style, I think at least one of the three lengths would put a smile on the face of any tenkara angler. All the actions are responsive, with good recovery, little tip bounce, and are very intuitive.

As the company’s name suggests, this rod is a little different. There are a few unique features and standard add-ons that you won’t find with many other manufacturers.

One is that it ships with a spare tip set. Many manufactures offer aftermarket replacement tip sections, but by the time you need to order them, it’s already too late. I think it’s a nice touch that Esoteric Tackle automatically includes them to give you an insurance policy before you actually need it. 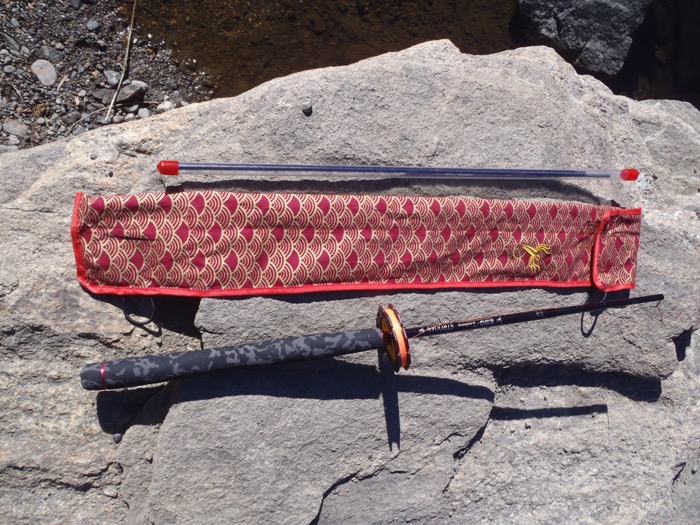 As you can see in the picture above, the spare tips (top) come in a small, lightweight tube that you can easily carry with you on the stream without adding weight to your kit or taking up space. And, they even provide a really gorgeous sack which accommodates both the rod and spare parts tube with the company’s embroidered logo … 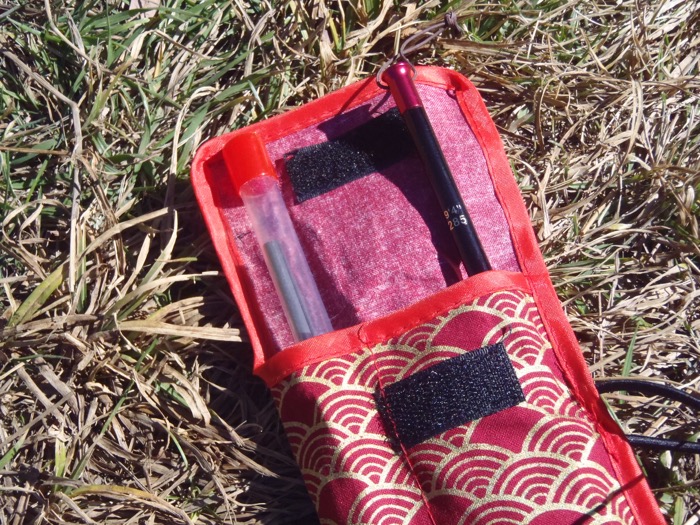 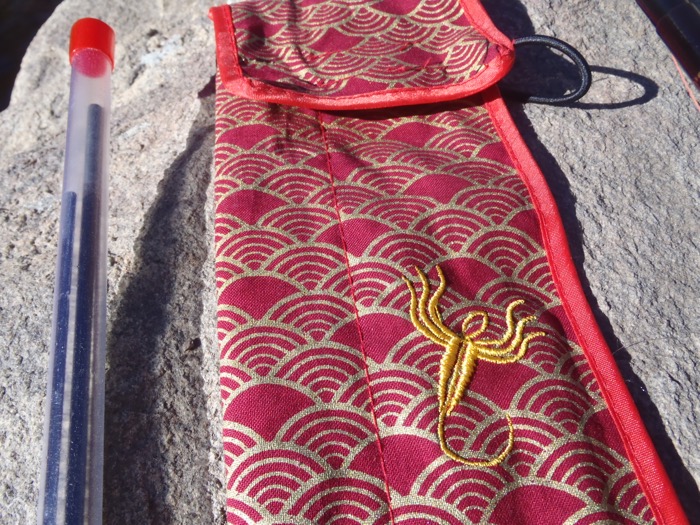 Another unique feature is the foam butt cap. The majority of tenkara rods have metal caps which some complain get cold when gripping the handle at the very end. While the skeleton of the Strooan’s end cap is aluminum, it’s covered in foam to be both ergonomic while also protecting your palm from the cold. Here you can see the unscrewed cap showing the machining and the rubber O-rings which lock the three positions into place … 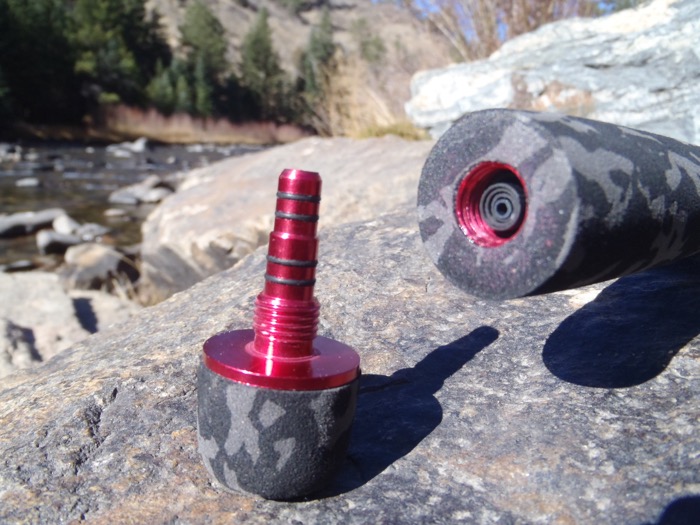 Speaking of the grip, the handle on the Strooan is a durable EVA foam that is slightly contoured to give you good purchase on the rod regardless of your style. It’s a subtle camouflage pattern which seems to be fashionable in the tenkaraverse today. One might argue that the camo adds stealth, but that would be betrayed by the glossy finish on the blank. If stealth were the goal, then a matte finish in combo with the camo would make more sense. It was probably more of an aesthetic choice. Either way, I could take or leave the camo grip–though given the recent sentiments on Facebook, many people seem to gravitate towards camo foam.

The lilian and end cap are pretty standard, except that the lilian is brown (as opposed to the typical red color) and the end cap is metal with a loop of spare lilian which also serves as an attachment point for storage. In the photo below, you can see both, along with the swivel tip common to many Japanese rods which purportedly prevents line twist (but my jury is still out on the efficacy of that) … 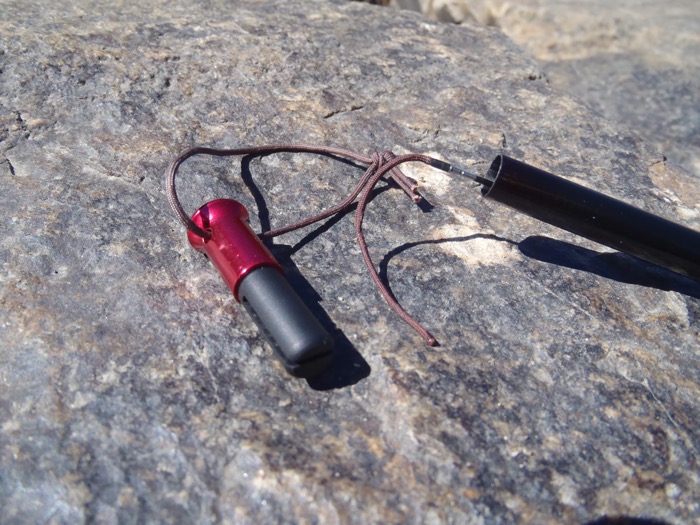 Here are a few other specs on the Strooan …

I like this rod and I’ve had the pleasure of reviewing several other products from Esoteric Tackle in the past. I know they’re an authentic company with a true passion for tenkara and good design. And the Strooan definitely confirms that dedication to me. It’s a great all-around rod for 90% of small to mid-sized trout or panfish, is high quality, fun, and has a bunch of nice bonuses others don’t offer. What more could you ask for?

Learn more about the Strooan or get one here