More Epoxy Tenkara Flies with a Twist (of wire) 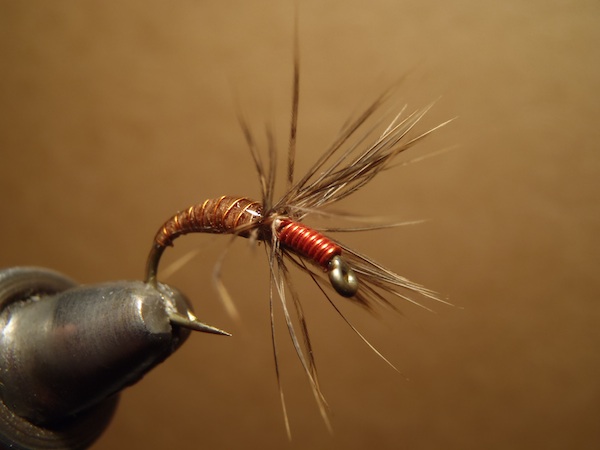 In my last post, I talked about some of my experiments with epoxy sakasa kebari (reverse hackle tenkara flies).  I was tying some more at my desk tonight and an idea struck me…

Many tenkara wet flies use a bright-colored thread between the eye of the hook and where the hackle begins.  It could be orange, red, yellow, etc.  My idea was that since the color really only functions as an attractor, why not make it dual purpose?  What if you could add color and contrast while adding weight to help the fly sink faster at the same time?

So, Instead of using thread at the head of the fly, I used medium gauge, colored wire to help the fly sink (orange in this case):

The 9 or so wraps of copper wire add a significant amount of weight and give you the same visual attractor effect as using brightly colored thread but make it heavier. This is just one example.  The wire, body, and hackle could all be substituted with different colors to produce an infinite number of variations.

If you look at the body of this fly, you’ll see that it is coated in epoxy but it doesn’t have to be.  I think the heavier gauge wire head could be applied to any tenkara wet fly where you want to add weight and color contrast.

Well, now, between the epoxy, mixed-in glitter, and wire head, I’ve got a lot of experimenting to do.  I don’t know what I’ll come up with next but it sure is fun to experiment!

How are you tweaking traditional tenkara flies?