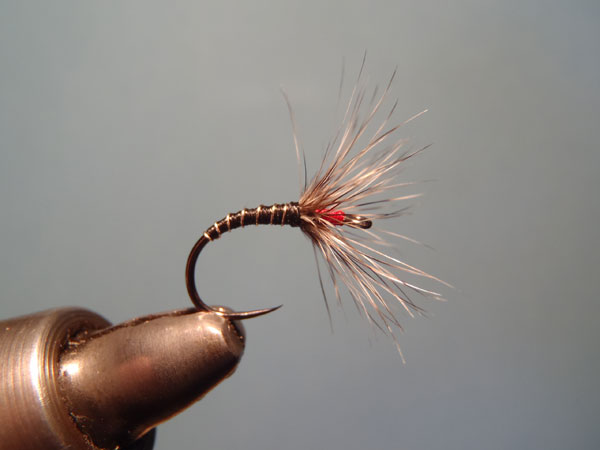 If you’ve been into fly fishing for any length of time, you might have heard of a pattern called the “Brook’s Stone“. It was invented by Major Charlie Brooks to imitate the big stoneflies on the Yellowstone River. It’s a simple pattern. Unlike most stonefly patterns, it doesn’t even have a wing case. It’s basically a dubbed body with a few wraps of hackle palmered through the thorax. But that simplicity wasn’t due to laziness or lack of tying skill–it was completely intentional.

Brooks observed that trout mostly took nymphs when they were drifting right-side up and ignored ones that were drifting upside down (read more on the history and see some pattern ideas here). So he started tying flies that didn’t have a clearly defined “back” and a “stomach” by eliminating the wing case and just wrapping the hackle all the way around the thorax as you would a dry fly.

The idea was that the fly would look the same when viewed from any angle. As we all know, depending on current and design, our flies don’t always ride right-side up. Sometimes they tumble or ride upside down. Brook’s design was an attempt to eliminate that from the equation. And since then, it’s been known as “tying in the round”.

I don’t know enough about entomology or trout behavior to corroborate this idea, but I do know that the Major spent a lot more time gathering empirical evidence on it than I have so I’ll at least entertain it as a sound theory.

So that got me to thinking… the majority of sakasa kebari are also tied “in the round”. The hackle is wound completely around the hook shank with no wing case and a simple, uniform body with no discernible top or bottom. Could this be another bullet point to add to the list of why sakasa kebari are so effective?