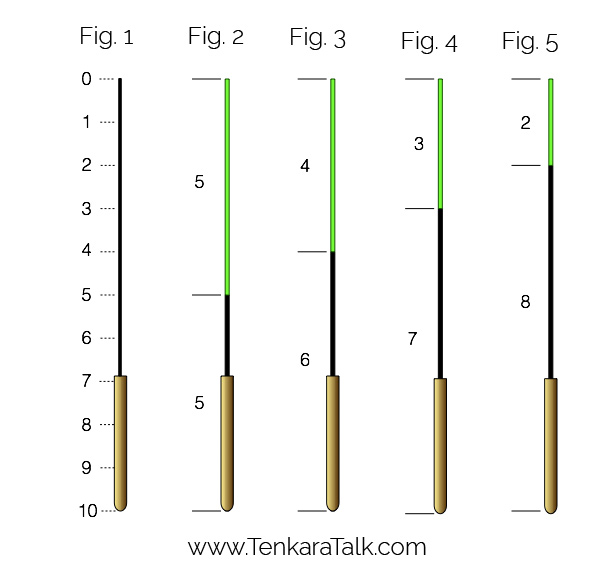 Probably the #1 thing that confuses people new to tenkara is the way rod actions are described. And I can see why. 5:5? 6:4? 7:3? What the heck do these numbers mean? While there are many good charts out there that (I think) describe these actions well, I still see a lot of people who are a little confused. They think the numbers are based on the number of segments in the rod or that they describe how stiff or soft a rod is. So in an effort to clear up any confusion, I asked my good friend Anthony Naples to put together a chart for me, and I’d like to offer another way to think of tenkara rod action.

First, let’s clearly spell out what the ratings in the Japanese system are. There are basically four:

It’s Where, not What

Now, let’s clear up a couple of misconceptions. These numbers have nothing to do with the number of segments in the rod. For example, you could had two rods that both have a 6:4 action, but one rod has 10 segments, while the other has 8. They also don’t tell you how stiff or soft a rod feels. I have 6:4 rods that feel extremely soft and 6:4 rods that feel really stiff. The bottom line: these numbers only tell you where the rod flexes most along the blank.

Admittedly, the Japanese rating system is a a little strange and pretty inaccurate since it doesn’t really give you a complete picture of how the rod feels. Because of this, some manufacturers like Tenkara USA have decided to start phasing it out, favoring a more qualitative rather than quantitate method of description (it will be interesting to see if other follow suit). I’ve advocated for a more precise system, but have yet to see one.  Probably the best one to date is the so-called “Common Cents” system advocated by Chris Stewart of Tenkara Bum and Tom Davis of Teton Tenkara (click the links to see how Common Cents works).

I don’t know what the “perfect” rating system would be. But, to paraphrase what Supreme Court Justice Potter Stewart said about pornography, “I can’t define it, but I’ll now it when I see it”. Until then, I’ll continue to tell people the only way to really know how a rod will feel and perform is to fish it. Unfortunately, since the majority of tenkara rods reside in the realm of online retailers rather than brick-and-mortar shops, it’s difficult to make a physical side-by-side comparison before buying. But having witnessed the exponential growth of tenkara over the last few years, I predict that that will soon change.

6 Things That Will Frustrate You About Tenkara (And What To Do About It)
May 13, 2017
13 Comments
Leave Comment