DIY Fly-Tying Tools Anyone can Make 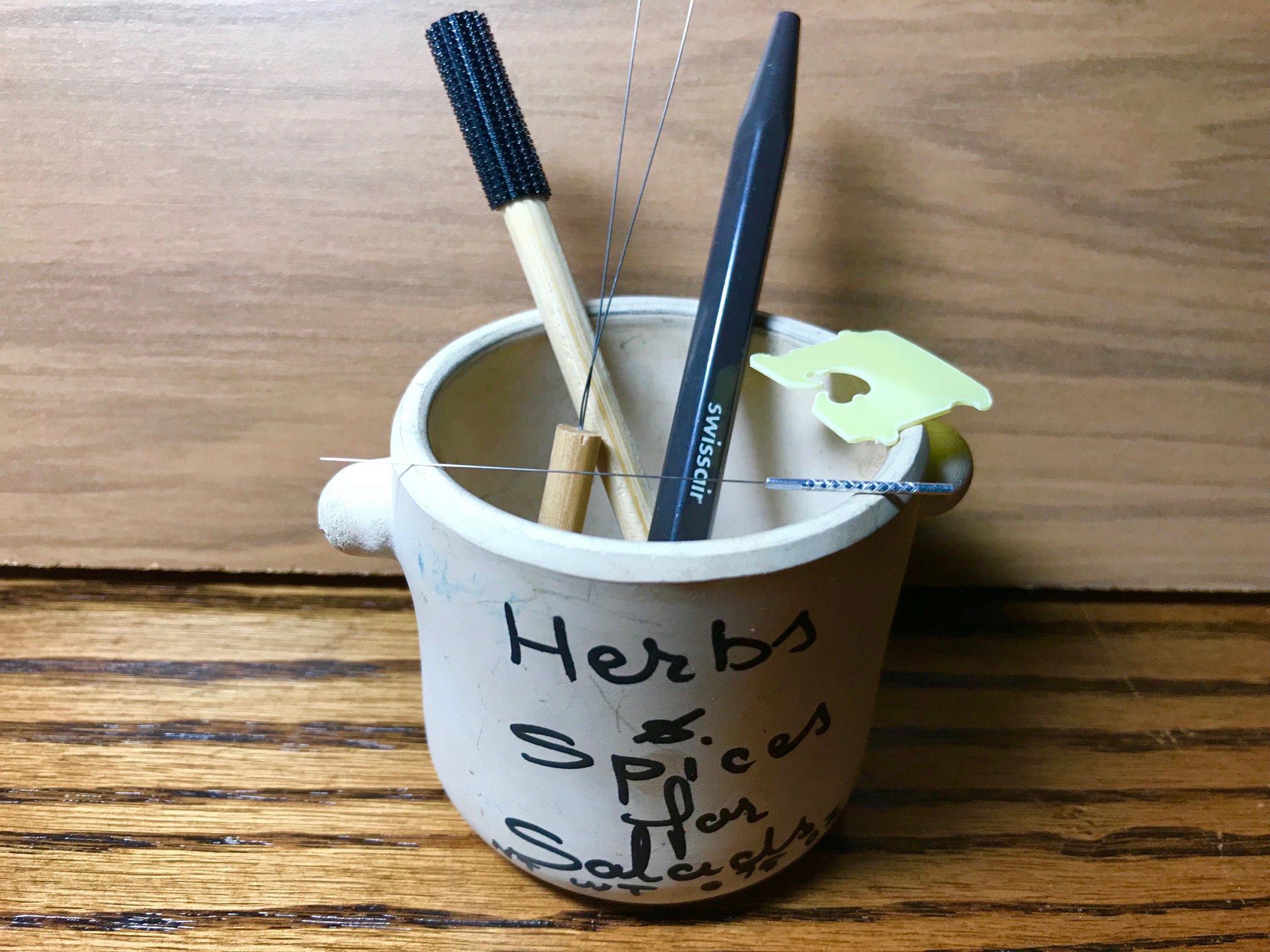 Early tenkara anglers were self-reliant. Without access to the well-stocked fly shops we have today, they had to be resourceful and employ whatever materials they could find in their remote mountain villages, provoking creativity and ingenuity. Hooks were made from bent sewing pins, they used feathers collected from their own livestock, and made lines from the tails of their neighbors’ horses. Depending on your perspective, this could seem either awfully crude or awfully romantic. My sensibilities lean toward the latter. But no matter what your opinion, I don’t think anyone would deny that making your own tools is at least fun.

This is by no means an exhaustive article on all the DIY tools you could make–just a few simple ideas to get the gears turning.

The mantra in artificial fly theory is that the “buggier” it looks, the more fish it will catch. And one way to do this, is to tease out the dubbing on your fly so that it looks “scraggly”, adding translucence and movement while suggesting legs, antennae, and tails. You can achieve this with a dubbing teaser. This is a tool that picks out the tightly wound fibers of the dubbing from beneath the thread or wire. There are several commercially available tools for this, but I have found that the best is a DIY one that takes only a couple of minutes to make.

Simply find a handle (in this case, I cut a take-out chopstick in half but you could also use something like a popsicle stick) and glue some Velcro to the tip. Make sure the velcro is the male (hook) side, and not the female (loop) side. You can buy Velcro that is self-adhesive, but in my experience, this doesn’t stick very well and it’s better to reinforce it with some super glue. Also, you might have some spare Velcro laying around or can cannibalize some from an old piece of gear you no longer use so why buy it? 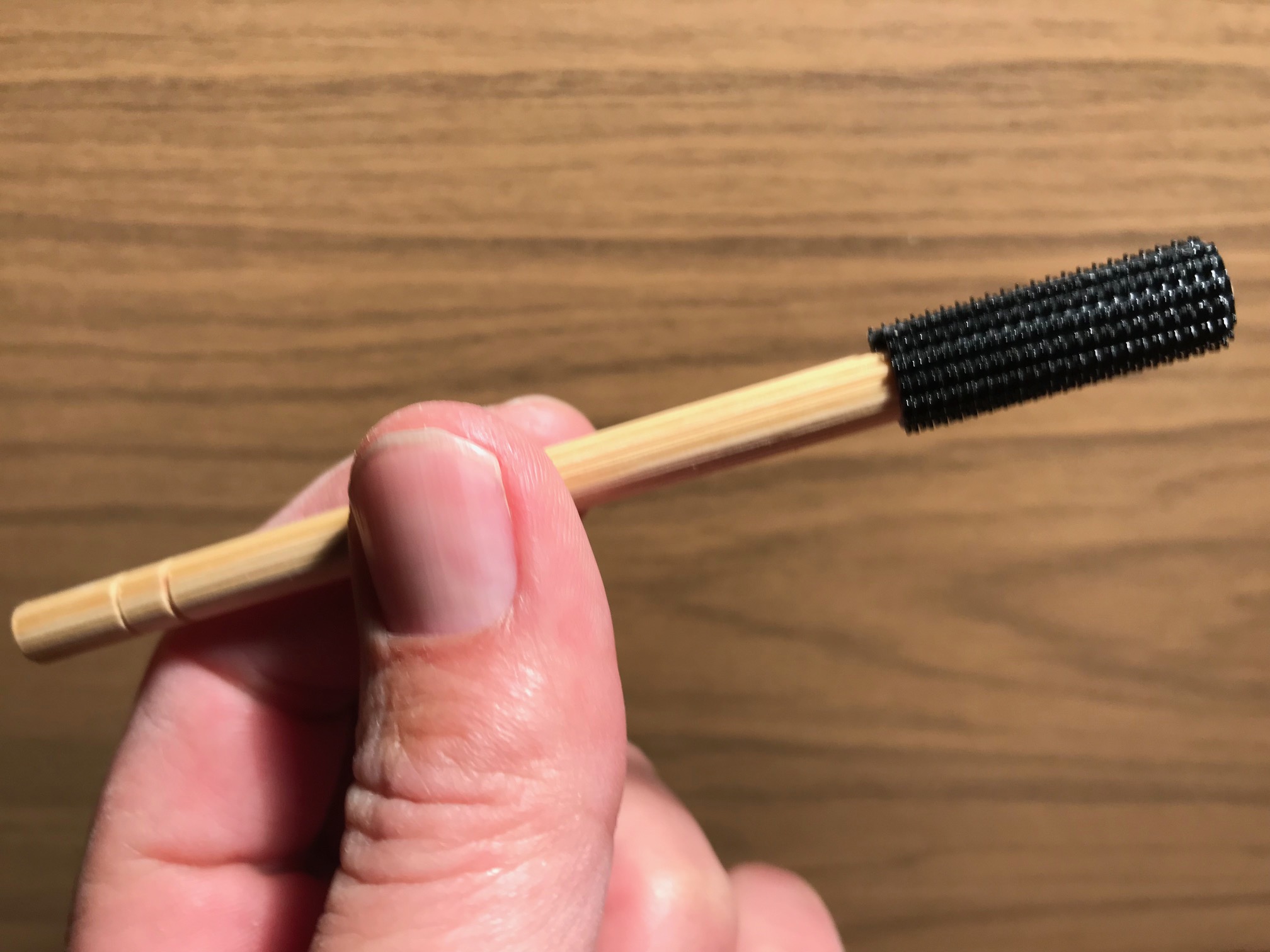 To use, tap and lift the dubbing on your fly so that it pulls out the fibers and scruffs it up. How much you do this is up to you depending on the effect you want to create.

When I was young and invincible, I could thread my 8/0 through a bobbin with the precision of a sniper. But as I’ve gotten older, my vision rebels against me making it feel like I’m trying to thread a rope through the eye of a needle. Bobbin threaders make this task much easier by giving you a larger loop through which to pass the thread. Again, you can buy them, but they’re so simple, why not just make one?

All you need to do is to find something for a handle (in this case, I’m using a length of wooden dowel), drill a hole in the tip, and crimp a length of wire to form an elliptical loop (you want the tip end to be a little “pointy”). Then, insert the tag ends of the loop into the hole and secure it with a drop of epoxy or superglue. 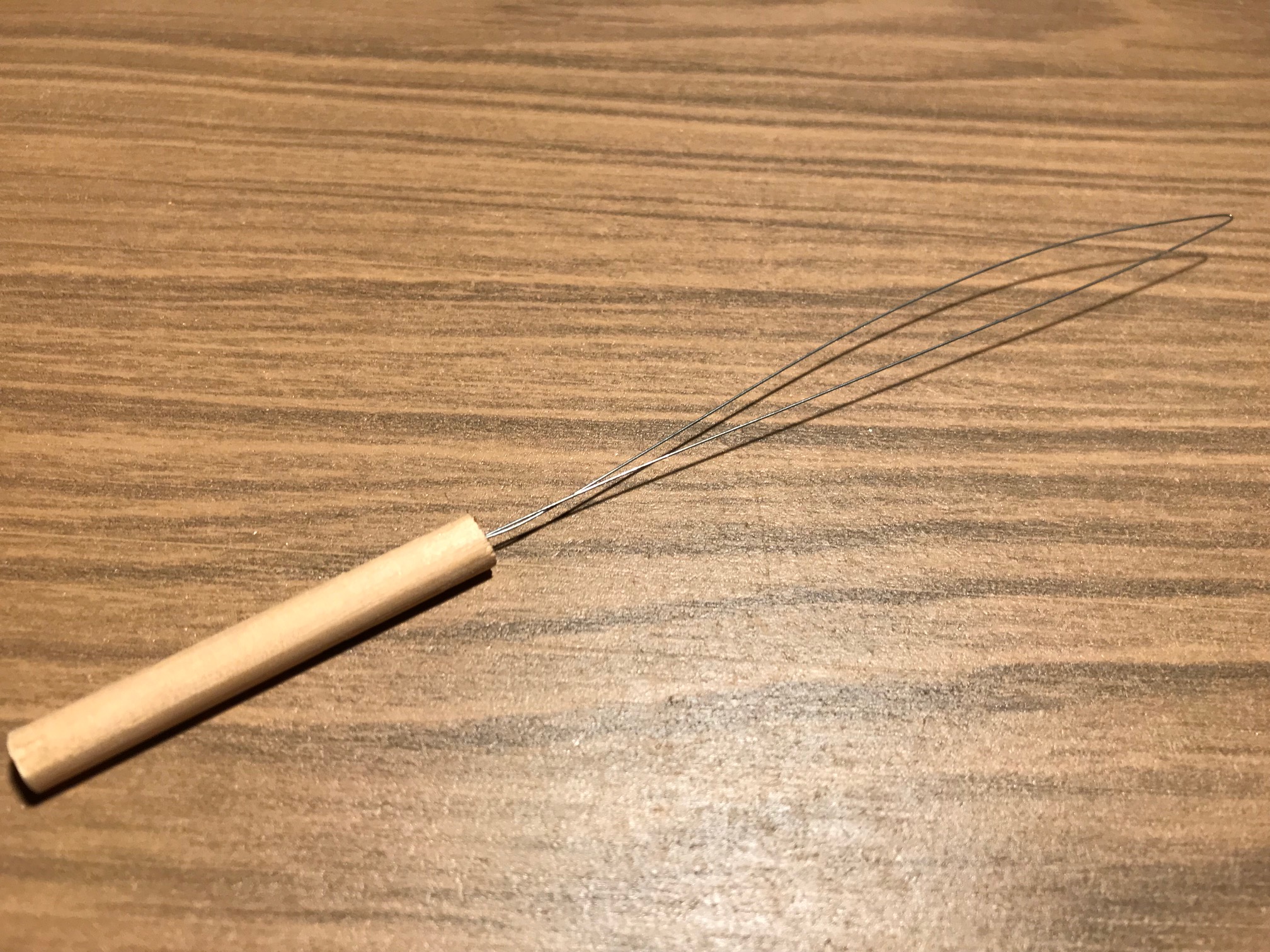 For the wire, I prefer an E guitar string since it’s the just the right gauge–thin and stiff enough to pass through the eye of the bobbin. I play guitar so I have a lifetime supply of wire for this. If you don’t play guitar, ask a friend who does to save you their old E strings but note: you only want the “high” E, not the “low” E. It doesn’t have to be a guitar string though. Any stiff and springy wire will do. Here’s a video on how to use a bobbin threader.

Go to your pantry right now and find your bag of Wonder Bread. Now, take off that little plastic tab that keeps the bag closed. You’ve just “made” a hackle guard! Hackle guards are used to push the hackle out of the way when tying off a fly at the head so that errant fibers don’t get accidentally trapped under your final wraps. To use, just slide the hole in the tab over the eye of the hook so that the hackle is pulled back while you tie off the fly. The slot in the bottom allows you to let the thread attached to your bobbin pass through. 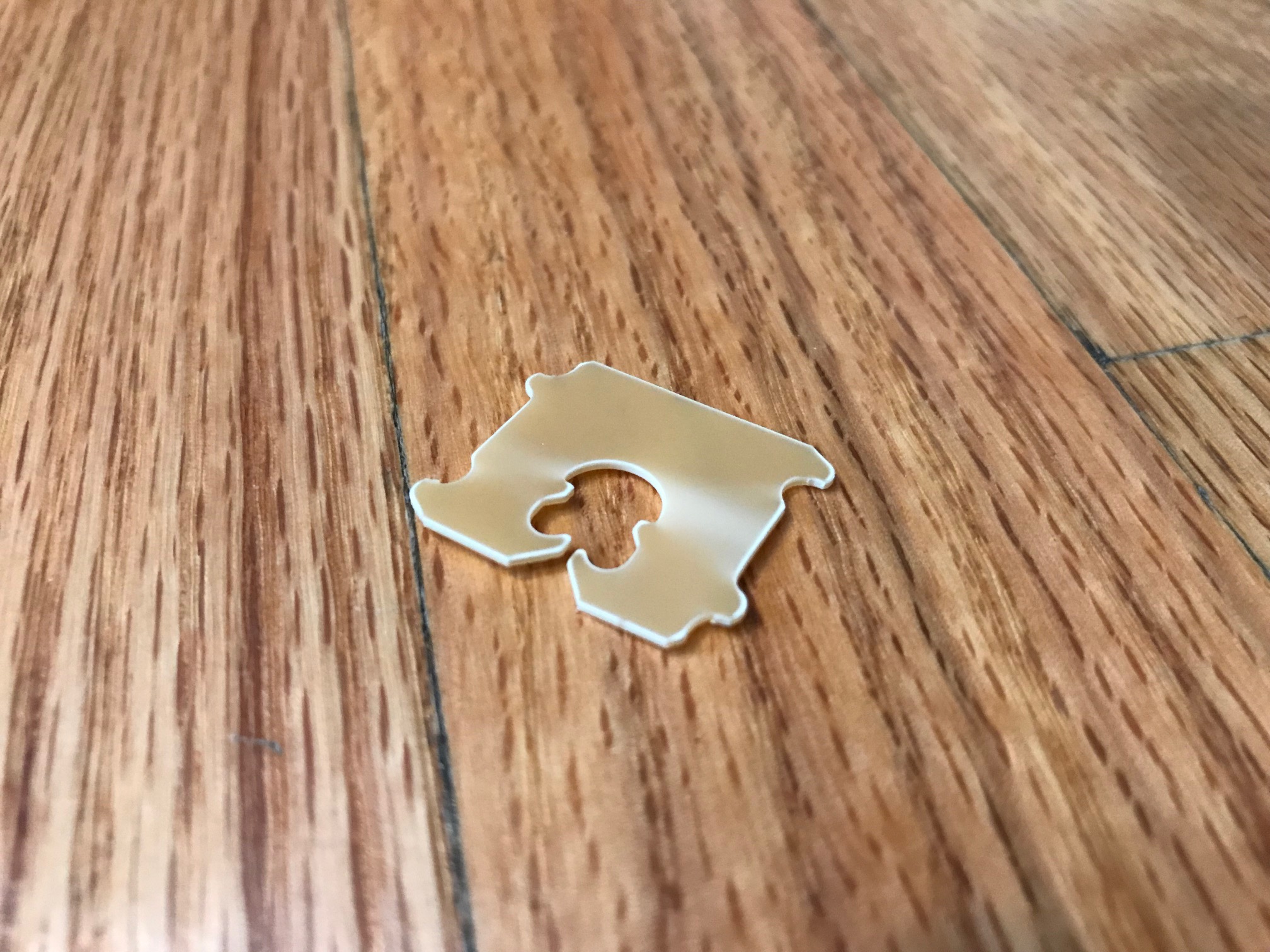 The size of the hole in these tabs works well on flies with larger hackle like sakasa kebari, but for smaller flies, you might want to make something with a smaller hole. For example, you could cut a strip of plastic from an old credit card, and burn a hole in it with a heated nail of any size you like. Just make sure you also cut a slot for the thread to pass through.

Speaking of finishing flies, there are basically two camps when it comes to this–the whip finishers and the half-hitchers. I won’t go into the intricacies of both here, but for those who prefer a half-hitch, this might be of interest. Some people who use half-hitches just do it with their fingers. But I don’t. The reason is that unless you’re a professional hand model, your skin is probably somewhat rough with tiny burrs that can fray or even break thread. And one of the most frustrating things in fly tying is breaking your thread just as you’re finishing it. I prefer a smooth surface so the thread glides off effortlessly and tightens securely.

For years, I’ve been using the casing from a free pen from Swissair. Remember when airlines used to give you free stuff? Me neither. The opening of the pen is the perfect diameter and the tip is tapered so it can stealthily release the knot without trapping fibers. Lots of pens will work for this. Simple remove the ink cartridge and you’re done. Just make sure you find one that has a smooth, tapered tip. Here’s how to use a pen as a half-hitch tool. 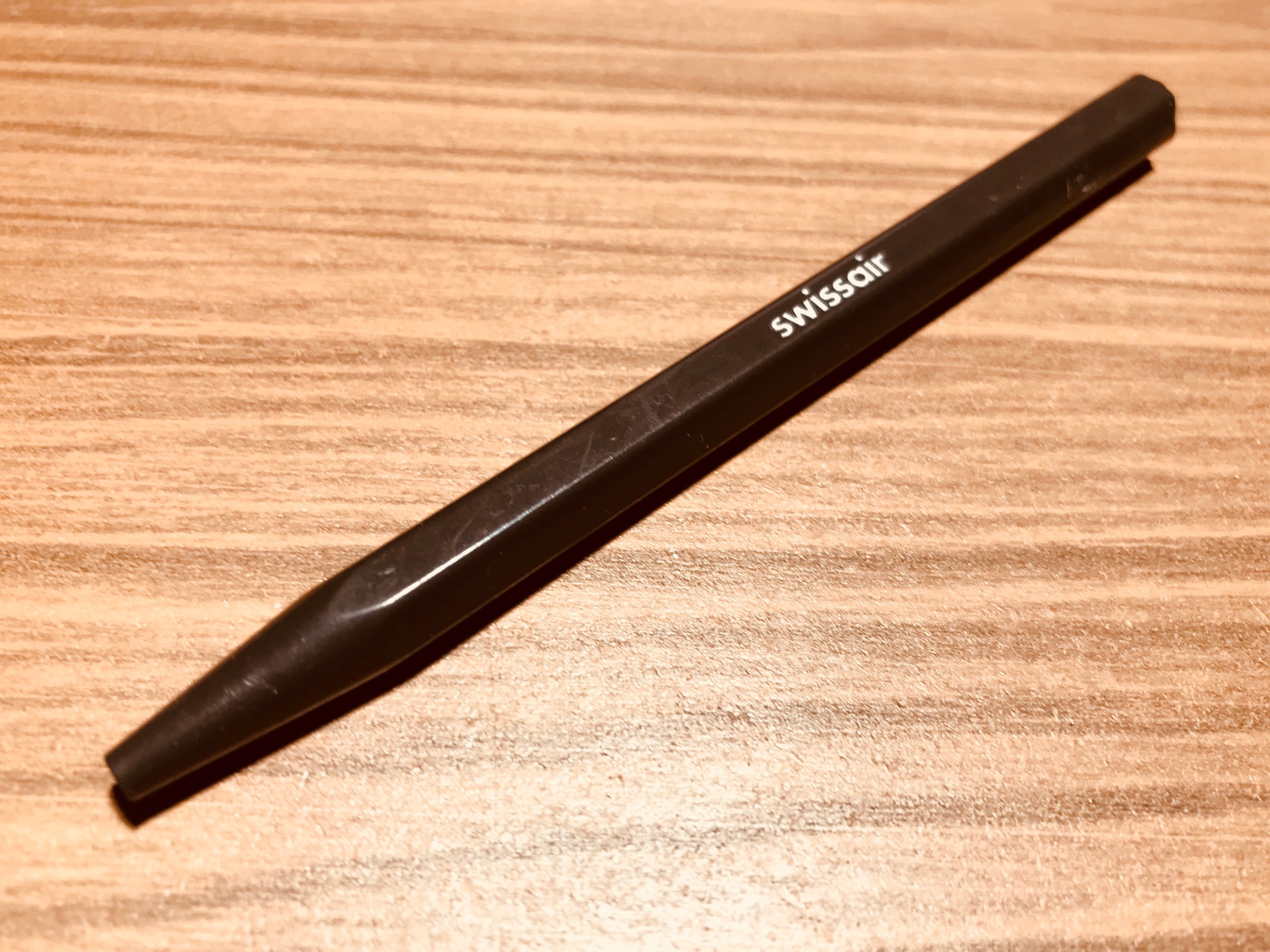 The bodkin may be little more than a “needle” with a handle, but it’s arguably one of the most versatile tools on the bench. It can be used for picking out dubbing, tying knots in pheasant tail fibers for legs, mixing epoxy, applying head cement … you name it! But I find most store-bought bodkins to be too thick–especially for applying head cement to small flies. Enter acupuncture needles.

So this isn’t exactly “DIY”, but think of it as “creative sourcing”. I’ve been using acupuncture needles as bodkins for a long time, and they have several advantages. First of all, they’re cheap. You can buy a lifetime supply for the cost of one commercial bodkin. Share them with friends and if you lose or damage one somehow, you’ve got plenty of backups. Secondly, they come in different gauges for different applications. For example, you might get a thin gauge for smaller flies and a thicker gauge when more rigidity is required (e.g. picking out fibers, tying knots, etc.). Thirdly, they’re usually made of surgical steel, which is high-quality and easy to clean. 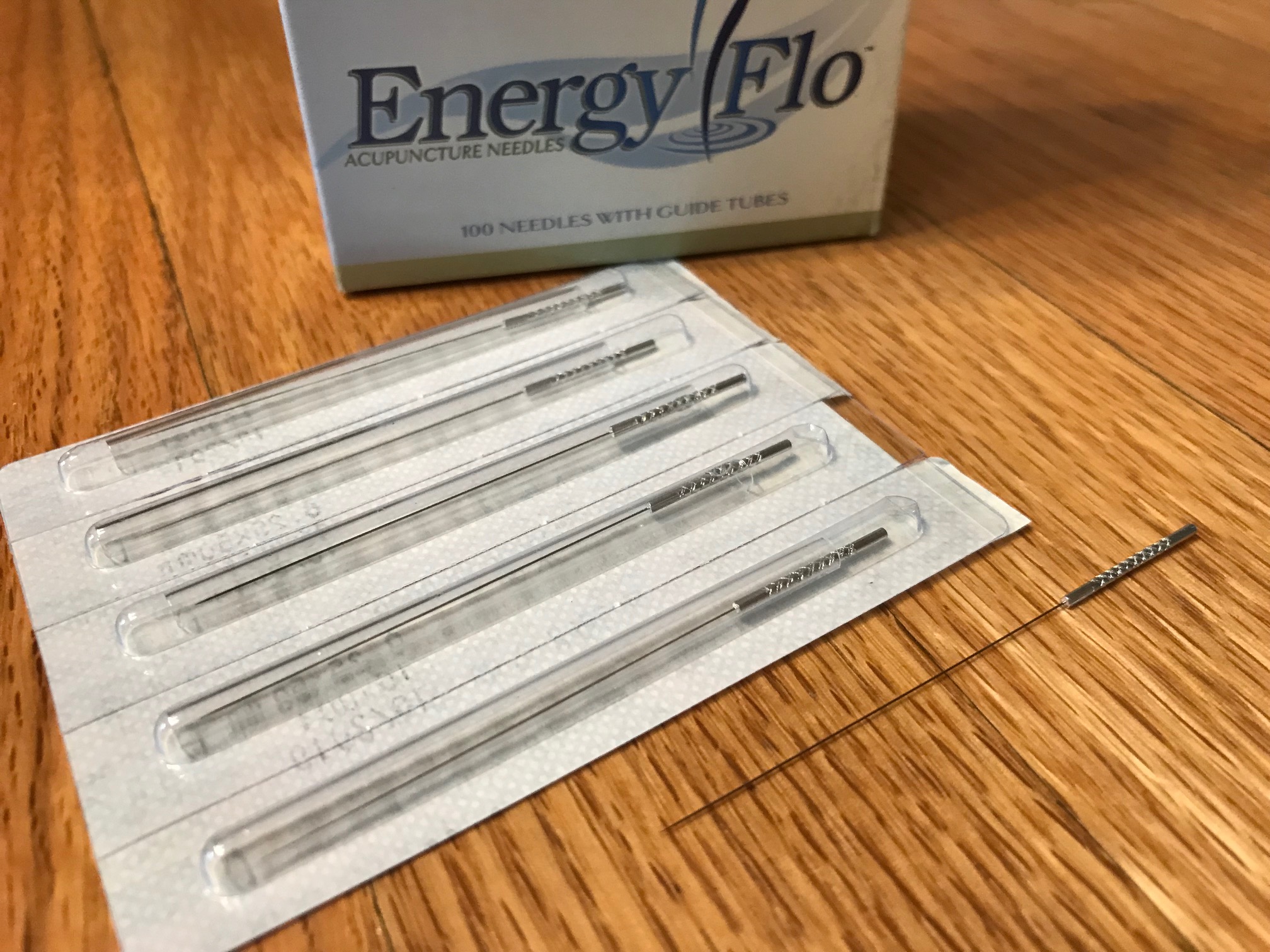 Like I said, these are just a few ideas. And the creativity is not limited to tools. You can also deck out your tying bench with some easy-to find items. Just use your imagination. A piece of driftwood can quickly become a unique tool caddy with a few minutes’ worth of work with a drill. That old Tupperware container whose lid went AWOL years ago can become a convenient waste bin Velcroed to the edge of your desk. If you have an eye for it, there are lots of possibilities.

Making your own fly tying tools is not only a fun outlet for creativity, but it’s also economical. You probably already have the right materials pining away in your junk drawer to make some of them. Why pay $12 for a dubbing teaser at the fly shop when you can make a better one for free and add a new dimension to your fly tying?

What are some of your DIY fly tying gadgets? Please share some pictures in the comments section below …