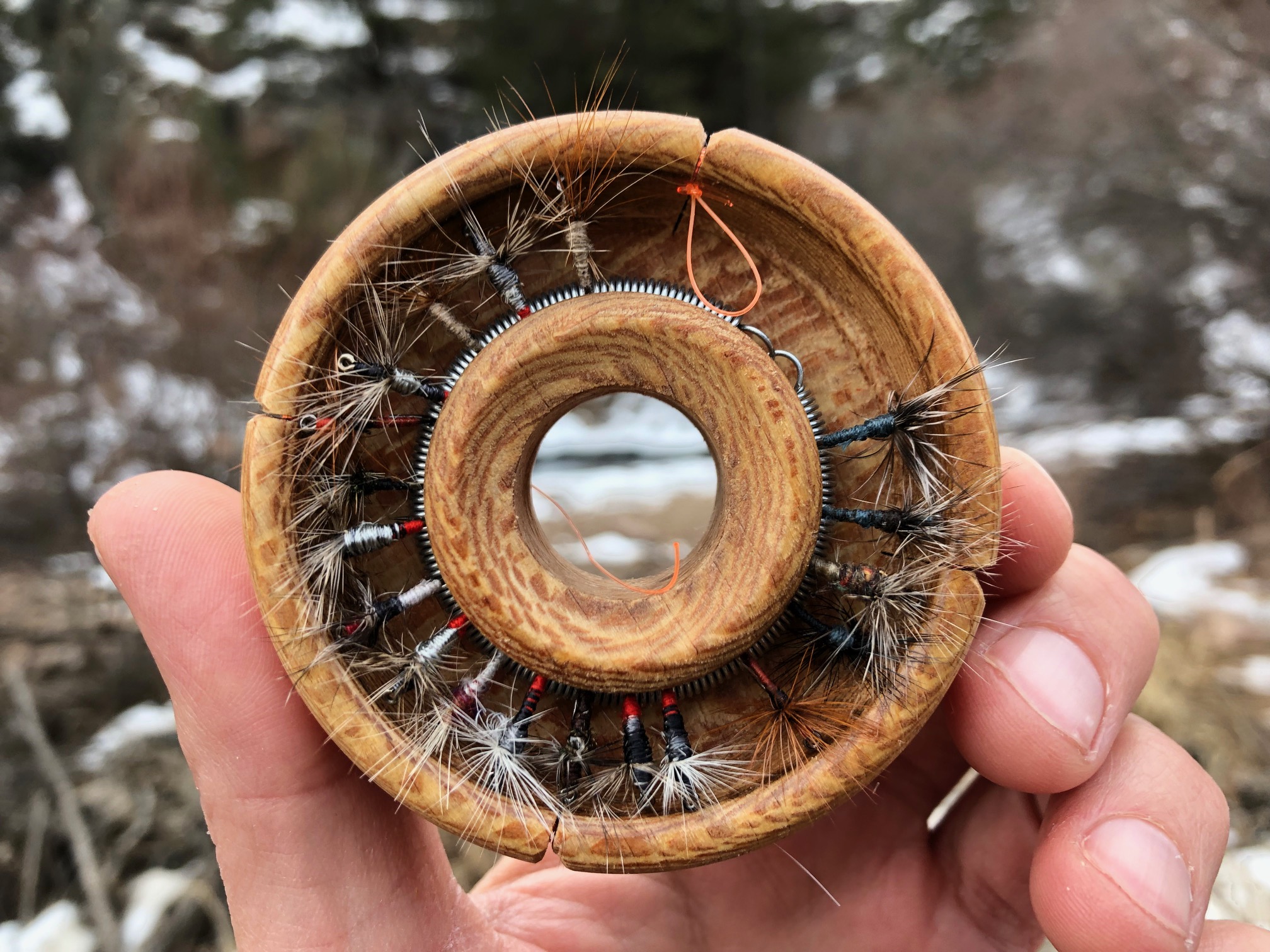 Just a few months ago, my friend Dennis from Tenkara Path and I were sitting in a cafe in Denver looking over his latest designs for his wooden bobbin spools. At some point, he pulled out a prototype of a new line spool he was working on. If you’re familiar with Tenkara Path spools, you know that they’re multi-functional, holding line, tippet, and flies all in one ultra-compact space. Somehow, he manages to push the limits of innovation and utility without sacrificing aesthetics and old-world charm. 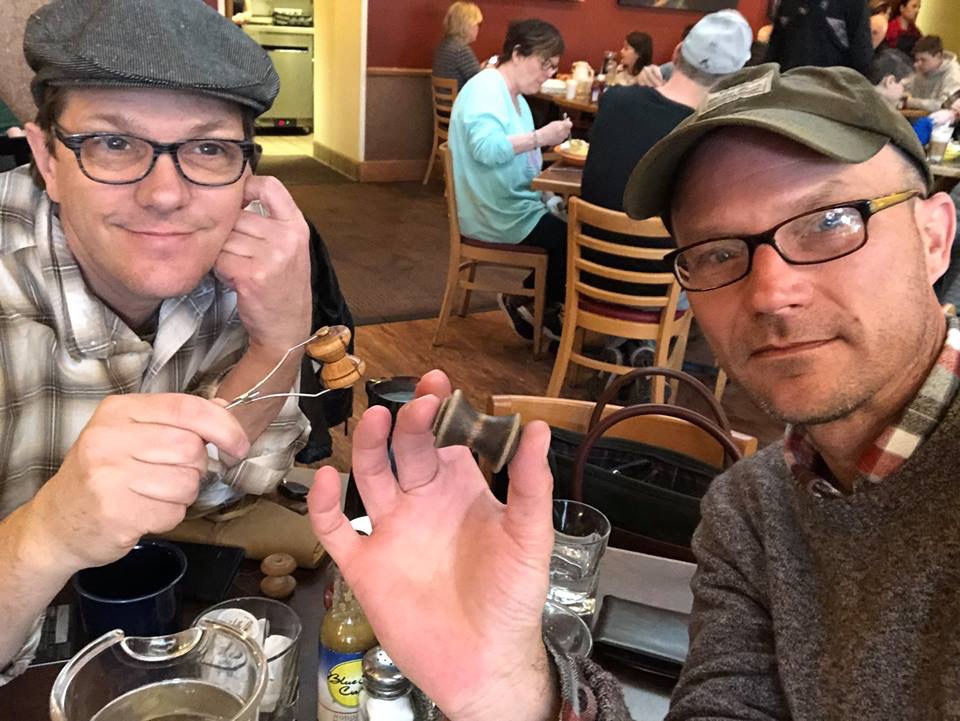 But this spool was noticeably different. Rather than his signature ring of drilled-out wells containing rare-earth magnets to hold flies, it had a large “hub” in the center. He told me that he was thinking of somehow adding foam to secure the flies in lieu of the magnets. Sitting there, holding that marvelous craft in my hand, my admiration of its beauty was suddenly disrupted, and I recoiled at his mention of the word “foam”. One of my pet peeves in design is when two materials that have no business being put together are forced into a shotgun wedding by their creator. And the most tragic one of all (and the one that’s unfortunately the most common) is to take a beautifully crafted wooden fly box and line it with vapid, soulless foam! It’s anachronistic sacrilege. Foam betrays the organic beauty of the wood and I knew I had to dissuade him from vandalizing his own art with such a monstrous material. But how? What compliments wood but would still secure the flies well? And then it hit me.

When I was a teenager, I had an old Perrine fly box (AKA the “poor man’s Wheatley”). It was a model #66 that held flies with metal springs rather than foam. You simply slid the hook points between the coils of the spring and the tension kept them in place. The idea solved a problem. Foam wears out over time from multiple stab wounds. But the springs would never wear out. It was clever, but for whatever reason, the design never really took off. At least is certainly never usurped foam or compartments. It struck me that he could wrap a similar spring around the hub and rather than sliding the flies in by the hook points, you would back them in by the bends (the way you do with slotted foam boxes). There would be enough space between the hub and the outer rim to accommodate the hackle of the flies without crushing them so it seemed like it would work. I pitched the idea to Dennis who said he would take it back to his workshop and “see what he could come up with”. And while he seemed somewhat skeptical, in the back of my mind, I knew he would execute it exquisitely, because he always does. He’s Dennis.

It wasn’t until a few weeks later while we were fishing on the St. Vrain when he showed me “what he had come up with” (pictured above). And it looked even better in person than the image I had had in my mind. Aesthetically, the metal complimented the wood perfectly and looking at it, I thought that the foam would have been even more egregious than I had originally thought. And in terms of practicality, the spring held the flies securely just as intended, passing both shake tests and drop tests with flying colors!

Earlier today, Dennis dropped by my house and gifted me one of my own. This one is teak with the standard notches and double-groove design to hold both line and tippet. Simply put, it’s gorgeous. 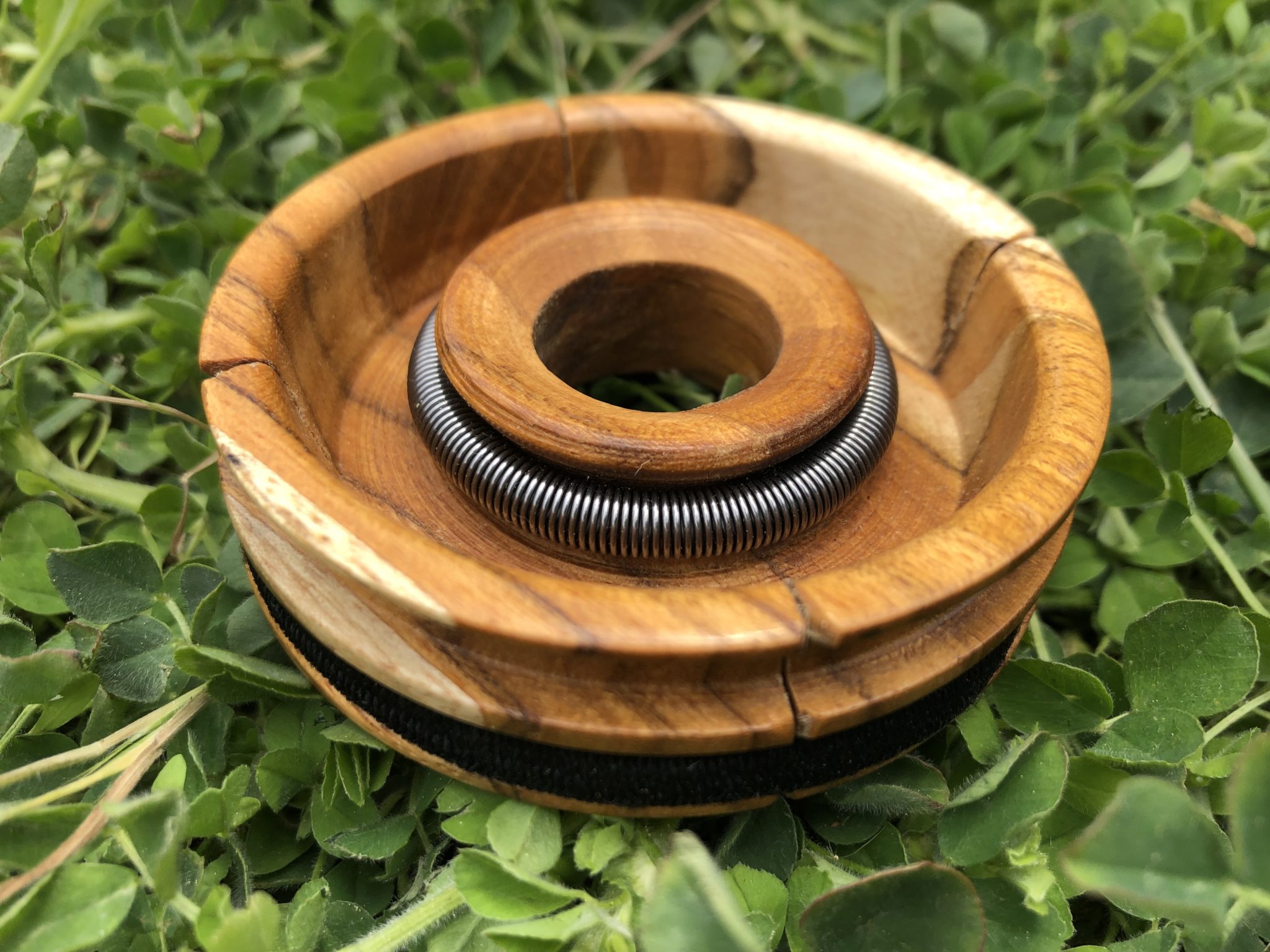 Like all of his spools, the maker’s mark is stamped on the back. 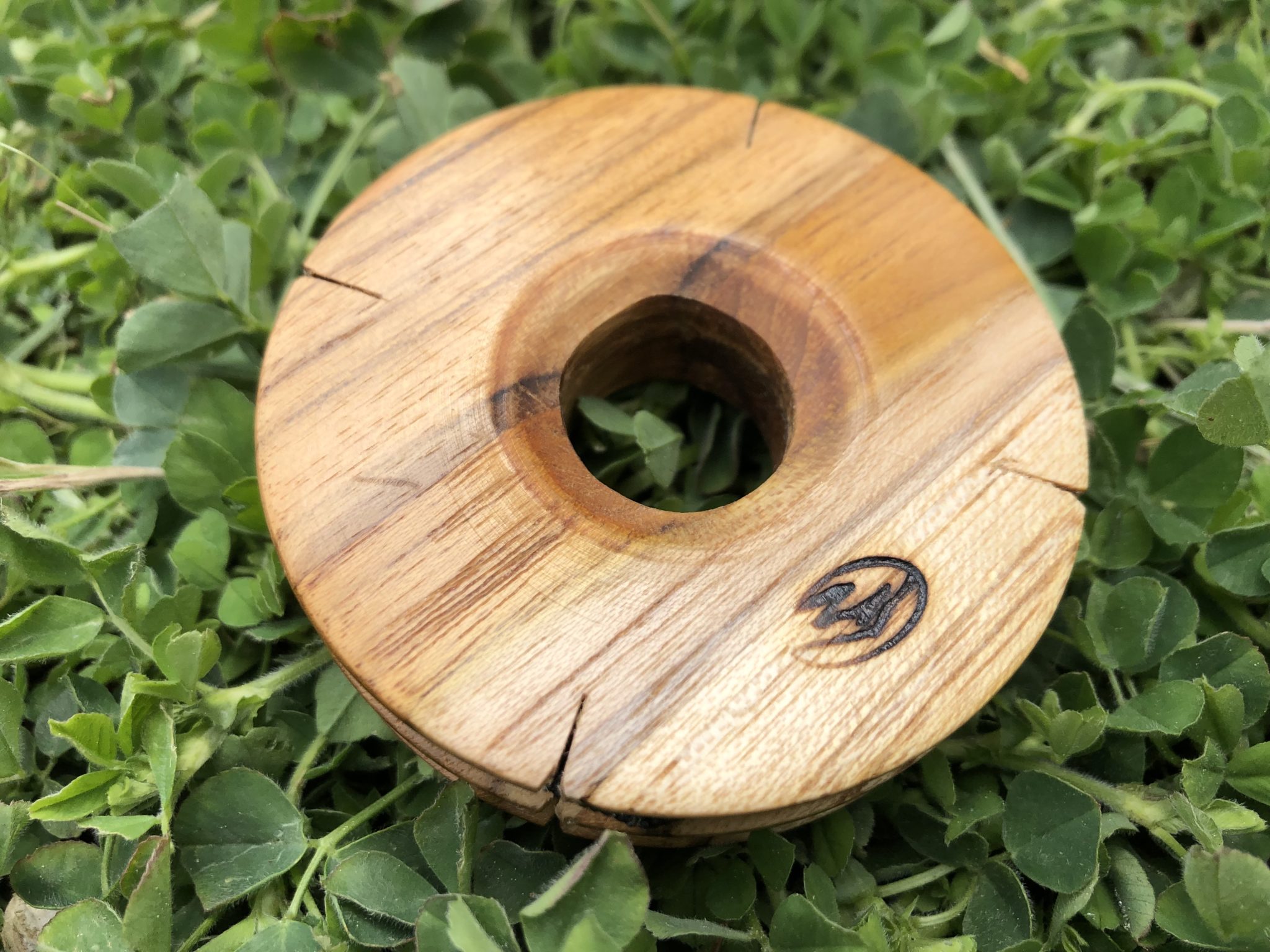 The size of mine will hold flies size #14 or smaller comfortably. #12s would fit but it would be tight. I mentioned this to Dennis and he said he could easily give more clearance between the hub and the inside rim to accommodate larger-size flies. It’s not crucial to me since I don’t store my flies in these spools. I only use the magnets (and now the spring) to secure the fly I already have attached to the line before winding or to temporarily hold a drenched fly or two to dry out. Even though the spools will hold at least a dozen flies, I still prefer to store my flies in my fly box. 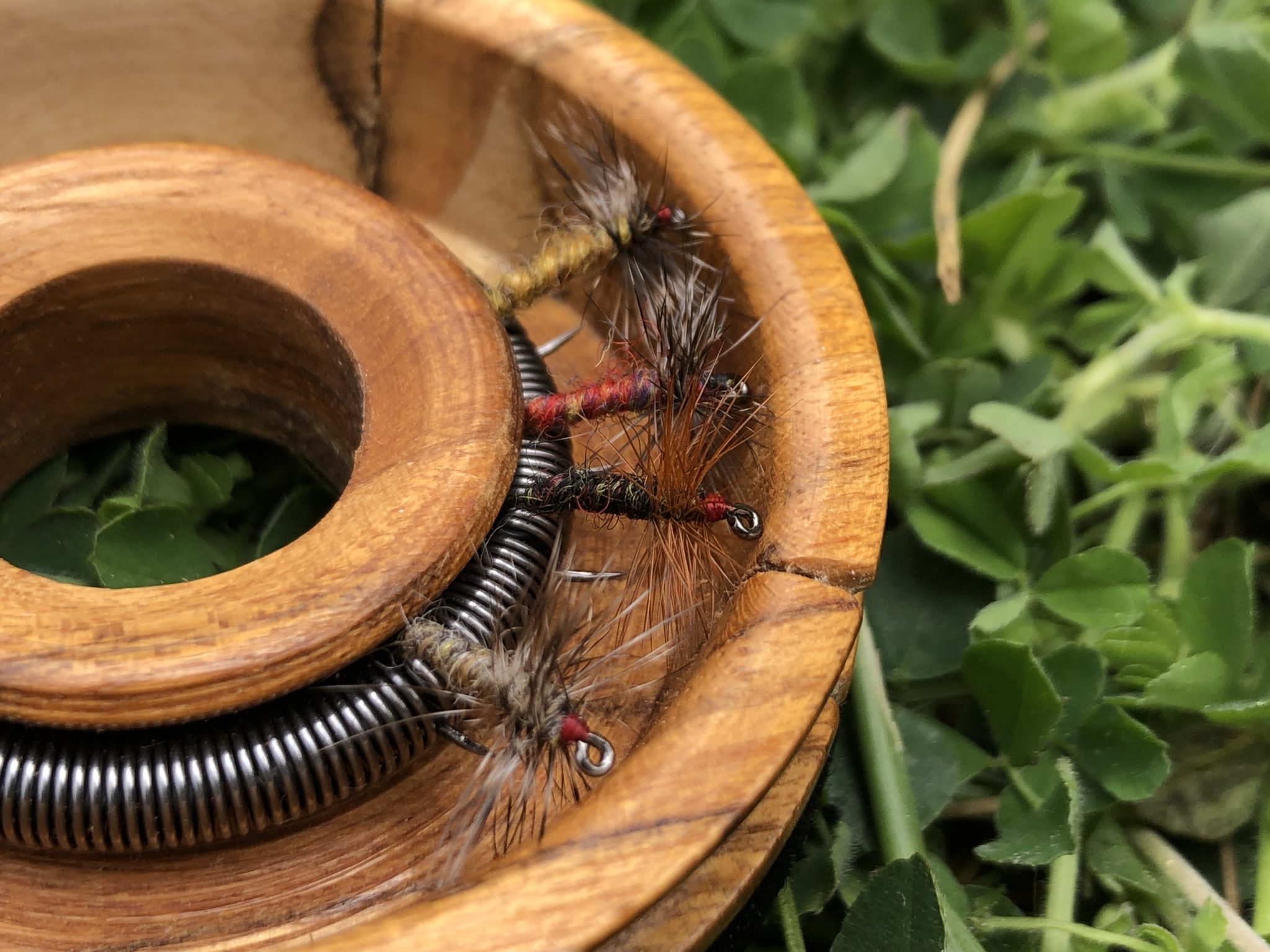 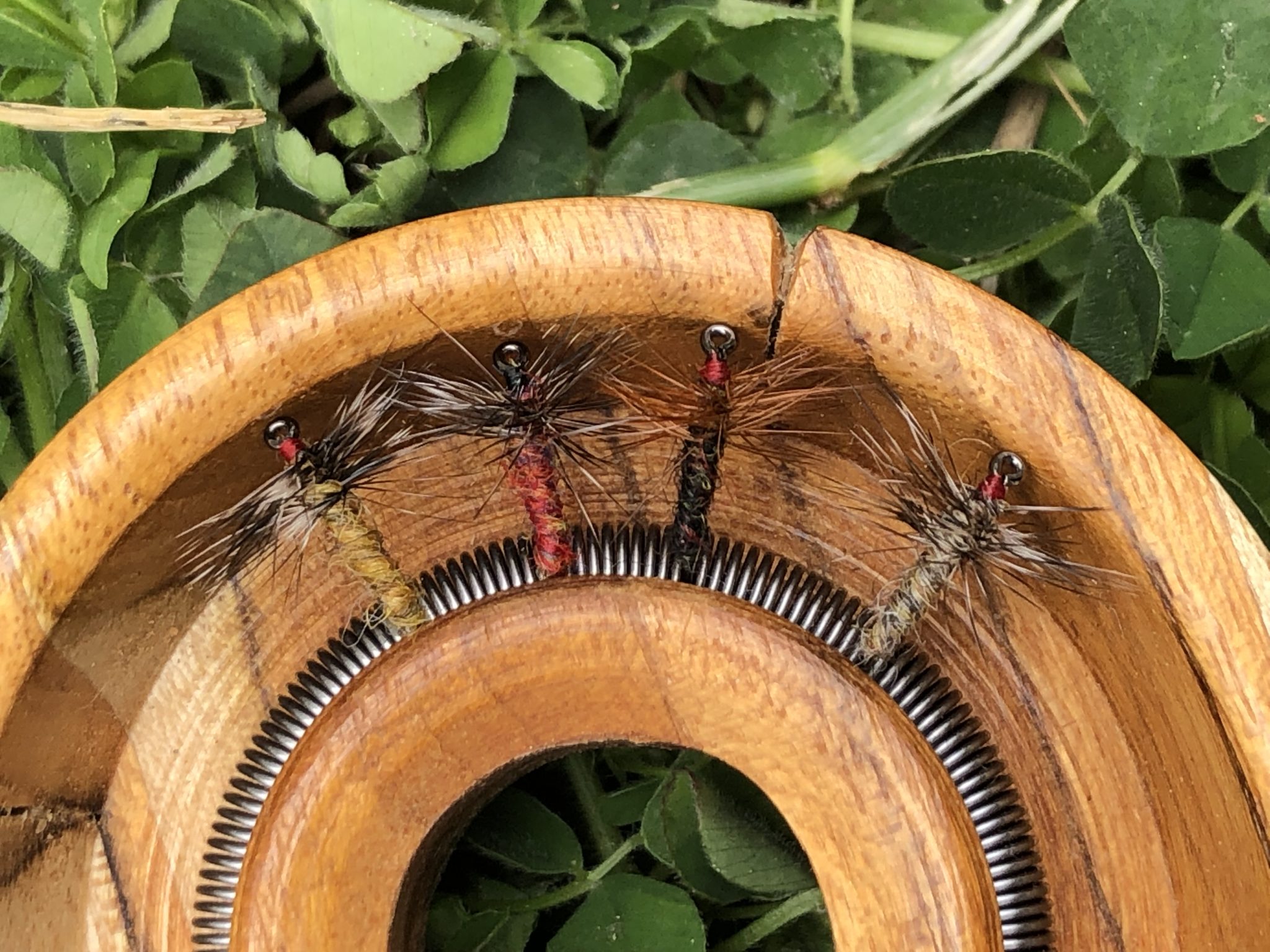 In addition to their aesthetics, uniqueness, and practicality, I think one of the things I love most about my Tenkara Path line spools is the direct connection to my friend–an artist whose ingenuity and creativity I greatly admire (and am sometimes jealous of). And on this particular spool, I guess some of that jealousy might be assuaged by taking pride in the fact that I played some small part in helping bring it to fruition. 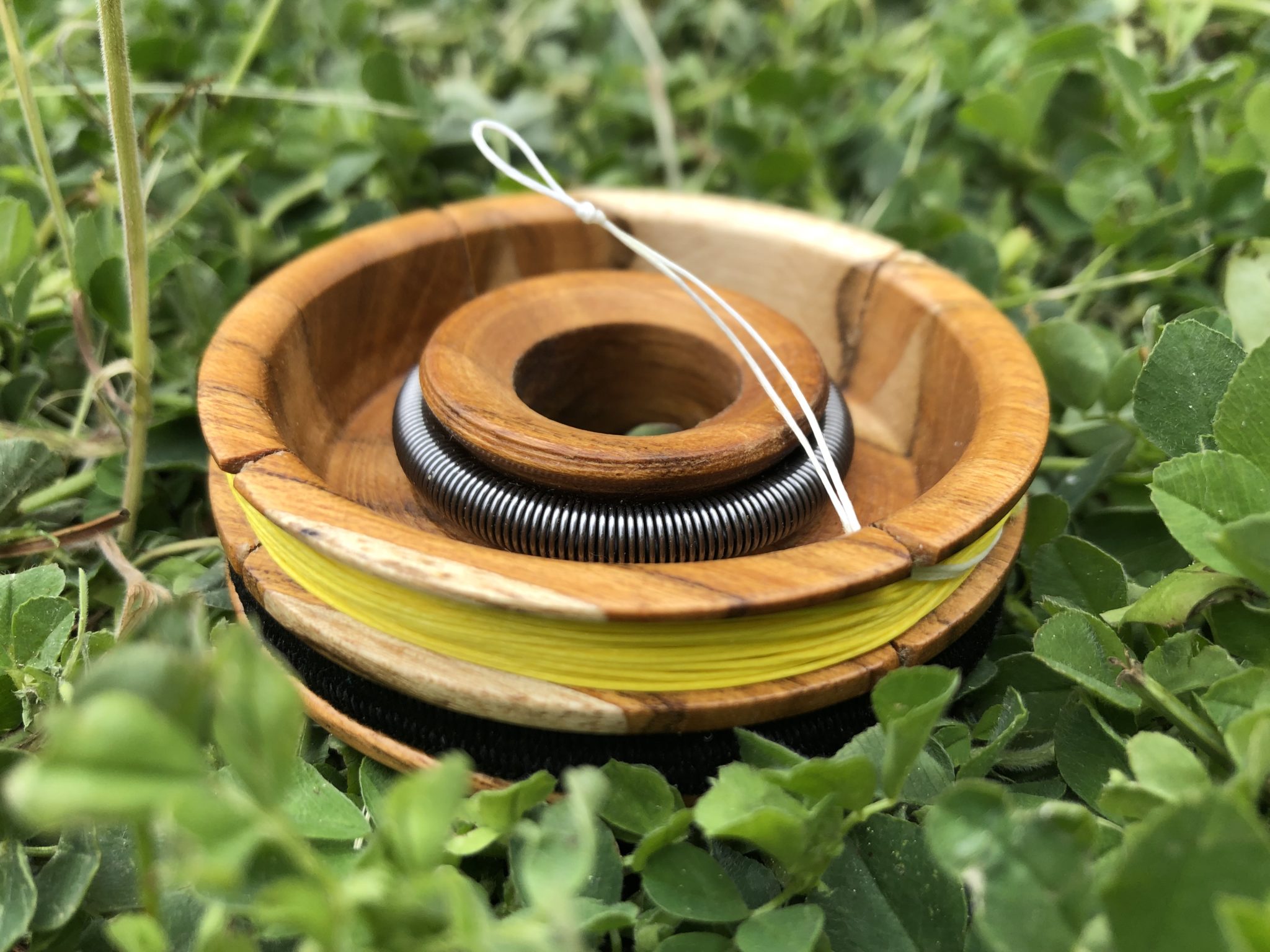 I now own three Tenkara Path wooden line spools that they’re pretty much all I use on the water. They’re my “working” spools and my plastic spools are merely for storage. Whether it’s out of aesthetics, sentimentality, or versatility, they just work for me.