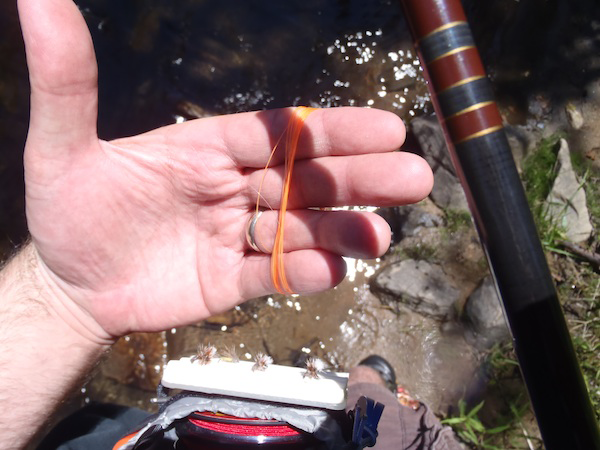 There seems to be a fair amount of confusion among tenkara newcomers when it comes to level lines. People talk about level lines in terms of “lb. test” or “breaking strength” and people don’t seem to get the rating system used in tenkara so I thought I’d make a post to clear it up and hopefully shed some light on this mysterious line rating system.

Having said the above, let’s try to understand the tenkara rating system.  You’ll usually see level lines referred to by a number such as “# 3” or “# 5”.  Basically, the smaller the number, the smaller the diameter and vice versa.  Now, there is no “official” consensus on exactly which numbers correspond to which diameters, but here is a handy chart from Tenkara Bum that will give you a good reference point:

Again, these are approximate numbers but much more accurate than describing lines in terms of breaking strength.  For diameters in between, a “.5″ is added to the number.  So, a line that is .012” might be considered a # 3.5 line.

So, which line do I choose?

This might seem like a cop out, but it’s the right answer:  it depends.  As a general rule, lighter lines like # 2 or # 3 make more delicate presentations but are a little harder to cast and don’t perform well in the wind.  On the other hand, heavier lines like a # 4 or # 5 cast easier (especially in wind) but won’t make as delicate of a presentation.  I generally prefer a # 4 line but ideally, you would have a few different diameters to match different conditions.  My advice is to try some different diameters and settle on two that you like:  one for more delicate presentations and one for windy conditions.

In general, tenkara anglers prefer fluorocarbon over nylon monofilament because it’s denser and tends to turn over better (especially in the wind).  You can fish with mono, but if you cast mono and fluorocarbon side by side, you’ll notice a difference and I’ll bet you’d prefer the fluorocarbon.  Another benefit is the fluorocarbon sinks faster than nylon and the traditional tenkara presentation uses wet flies so it’s probably the better choice.

Most tenkara anglers prefer a line that is very visible so they can track their casts and strikes. Unfortunately, hi-vis fluorocarbon is hard to come by in North America as most fluorocarbon sold here is clear. These are the only two sources for fluorocarbon that are easy to see and easily attainable in North America: