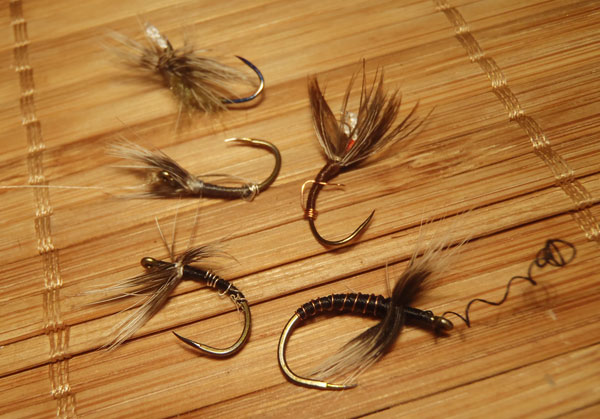 Let’s face it.  Even the most expertly tied fly is not immortal.  Though it might have escaped the perils of underwater snags, tree branches lurking in our backcasts, or weak knots, it will eventually succumb to the merciless jaws of countless trout ripping it to shreds.  And at some point, it’s time to retire it.  The problem is that hooks today are made so well, that they far outlive the comparatively fragile thread, fur, and feathers we tie our flies with.  It’s a shame to throw them away when they’re still perfectly good.  It’s even worse when you ties with expensive or hard-to-find hooks.  So, why not reuse them?

I had never even considered recycling my hooks until about ten years ago when my oldest fishing buddy George told me a story about his brilliant idea to save money.  Over the years, he had acquired a pile of flies that were basically trashed but the hooks were still good.  And when I say “pile”, I mean a probably hundreds and hundreds of flies.  He was trying to come up with a good way to remove all the material from the hooks so he could reuse them.  But there were too many to do one by one (it would have taken days). He wanted to find a solution that would take care of them all at once.  Finally, George came up with his Eureka moment.  He poured all the flies into a jumbo sized coffee can, doused it with gasoline, and lit it up.  It worked perfectly!  All the material was burnt off, right down to the bare hook shank.  It seemed like the perfect solution, until he started tying with them…

He put one of the hooks into his vise and started the thread.  Almost immediately, it snapped in half.  He tried another.  The same thing happened.  This went on a few more times until George figured out that the heat from the flames had removed the temper from the steel.  It made them brittle, and essentially useless.  So instead of saving a couple of hundred dollars, he was left with a pile of ruined hooks, and a good story to tell others while getting rigged up at the tailgate.

Since then, I have never been able to find a way to strip materials off of hooks en masse.  Of course, I tend to not accumulate vast quantities of trashed flies like George.  I typically lose them before they unravel.  Many anglers say that they more trashed their flies get, the buggier they look and the more they catch fish.  I think this is true, but only to a certain point.  And every season, I end up with a handful of flies that are beyond believable to trout anymore, yet their hooks are still in good condition.  And in my experience, the best way to reuse them is to strip off the material one by one.

All you need is a razor blade and a little patience.  A straight razor will work, but I prefer X-acto-style knives or razors with a handle since it gives you better leverage. And of course, the sharper, the better. 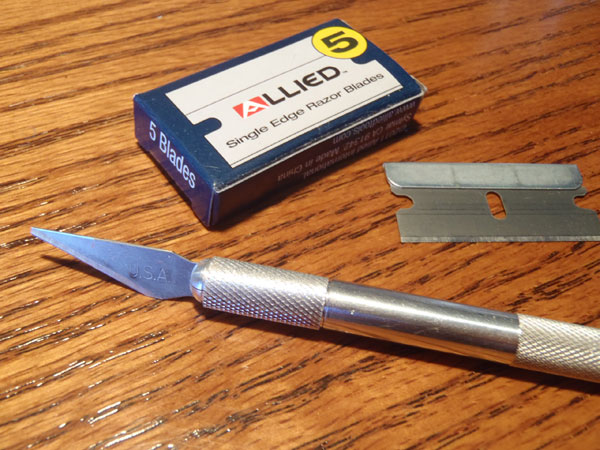 You’ve probably already guessed the technique:  Take the razor, and shave off the materials from the hook shank.  That’s easy enough but here are a few caveats you might not have thought of: 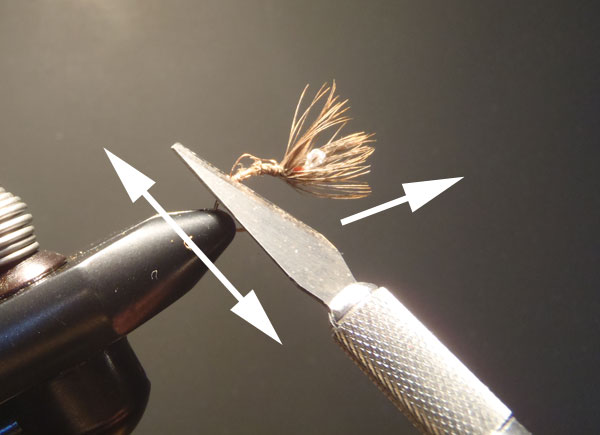 Is it really worth it?

Now you might think that it would be a waste of time to sit there at your desk scraping off materials just to save a lousy hook or two when you could be tying instead.  And normally, I’d agree with you.  But I tie on some hooks from Japan that only seem to be sporadically available on eBay.  I never know when the next batch will be available so it makes sense for me to not use up my reserves if I don’t have to.  I probably don’t save much money by doing it–it’s really more so I don’t run out during a drought.  However, I’m sure for some, it actually will be a money save (especially if you have a penchant for expensive or exotic hooks).  It’s really up to you to decide if it’s worth it or not.

If you do decide to recycle your hooks, here’s another tip so that it doesn’t turn into a time sink.  Instead of sitting down with a big pile of flies for a long “shaving session”, I keep my trashed flies at my tying desk.  When I sit down to tie a fly, I first look in the pile to see if there’s one with the hook that I want to use.  Then, I strip it down and tie with that hook.  It only takes a few seconds and saves time by not having to find all the right packages to put them back into my hook inventory.

Do you reuse your hooks?  Does it save you money?