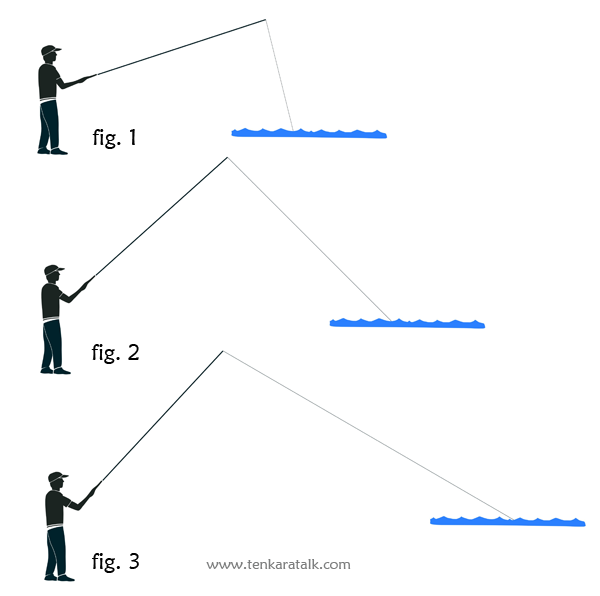 If you’ve fished tenkara for any significant amount of time, at some point, you’ve probably run into a situation where you wished you had a line that was either longer or shorter than the one you had on.  But since tenkara is fixed line fishing, you can’t adjust line length as you would with a reel.  Luckily, the connection between line and rod in tenkara allows lines to be switched out easily, allowing you to adapt to changing conditions (or, you can simply tie more line on or cut it off). Even the most experienced tenkara anglers in the world such as Masami Sakakibara use different line lengths depending on the water they’re fishing, so I think it’s worth every angler’s time to experiment with different lengths and see how they perform in various situations.  I see basically three categories: short lines, rod-length lines, and long lines.  Here is a brief summary of what I believe are some of the advantages and disadvantages of each…

“Short” lines are lines that are significantly shorter than the rod.  So, for example, if you had a 13′ rod, maybe a “short” line would be 5-8′.  Notice that in the diagram above, a rod-length line (fig. 2)  forms more of a triangle. But when fishing a short line (fig.1), the rod is held more parallel to the water and the line is more perpendicular. Eliminating extra line means less potential drag, and a more direct connection to the fly and fish for a better dead drift and hook set.  Of course, this also means that distance is very limited so the angler will have to be in close proximity to the fish and run the risk of spooking them.  But in certain situations (especially if you have a low canopy), short lines might be the best option.

Most tenkara anglers I know use a line that is roughly equal to the length of the rod (though it may be a foot or two longer or shorter).  This is probably the most versatile length for the kinds of streams tenkara was intended for.  If you need more distance, you simply move closer to the fish.  If you need less, simply step back.  Of course, depending on the wading conditions, it might not always be possible to change position so distance can be a limiting factor. When a dead drift is required, these lines are very easy to keep off the water, eliminating unwanted drag.  They’re a good compromise between long and short lines.

“Long”, of course, is subjective.  But let’s just say that we mean lines that are significantly longer than the rod. So, for example, if fishing a 13′ rod, a “long” line might be 16′, 18′, 20′, etc.  I first got interested in long lines for tenkara when I read an excellent post by Daniel Galhardo from Tenkara USA (read it here).  The advantage is clear:  distance.  But it also poses some challenges.  For one, you can really only fish at distance.  It can be difficult to fish in close when you need to and if you don’t have room to back up, it might be hard to re-position yourself to fish closer in (especially if you’ve got trees behind you).  There is also more line to pull in when landing a fish and some might find the last few seconds of the fight a little precarious at first. But with a little practice, it can be learned fairly easily (see here).  I’ve also noticed that when rigging and unrigging, or when moving from spot to spot without collapsing the rod, it’s much easier to get snagged on bushes, rocks, trees, or sticks on the ground just because there’s more line to manage.  You have to be a little more conscientious of where your line is when it’s not in the water.  And lastly, since a line longer than the rod forms more of an isosceles triangle (as opposed to more of a regular triangle like rod-length lines), it can be a little more difficult to keep line off the water for a dead drift.

It might sound like the disadvantages of long lines outweigh the advantages, but I have come to favor long lines. Most of the streams I fish are wide open and I don’t have to deal with a canopy  so a long line works.  Also, I tend to manipulate the fly more than dead drift it so keeping the line off the water isn’t critical.  Personally, I like the feel of long lines better.  More line off the tip means more weight, making it very easy to feel the rod load and unload.  This feedback allows me to cast the rod without thinking about any mechanics.  It just feels more natural to me. And I think many people with a background in fly fishing would feel more comfortable with a longer tenkara line, as it will be more similar to casting the heavier plastic fly lines they’re accustomed to.

Line length in different conditions is definitely a matter of preference.  Some may disagree with what I consider a pro or a con, but these are just my observations based on my experiences.  At any rate, I encourage you to get out there and try out different lengths to see what works best for you on your local waters.  You might be surprised on how much of a different even just a foot or two can make!

What do you see as the pros and cons of different line lengths?