How to Fish Small Meadow Streams 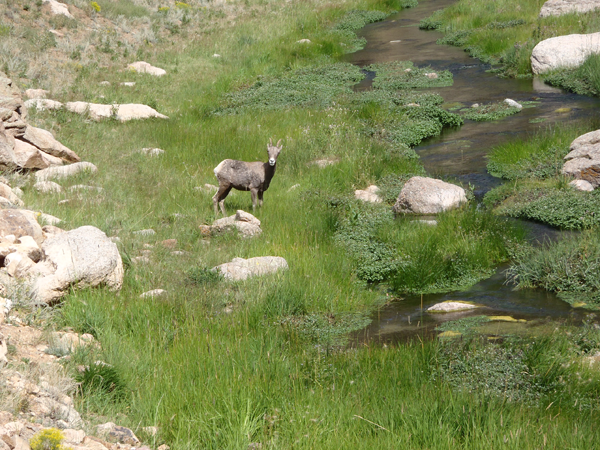 Small, meandering meadow streams certainly make idyllic backdrops but they pose several unique challenges for the angler. Typically, these streams are very shallow with slowly moving, crystal clear water meaning the fish can see you coming a mile away and will scatter at the slightest shadow, vibration, splash, or sound. It’s not hard to imagine why. With little refuge, trout in such waters are easy targets for predators so they have to constantly be on their toes (or fins, as it were). Luckily, tenkara is perfectly suited for fishing these types of streams and will give you an advantage over conventional fly tackle. Let’s look at a few of the challenges skinny meadow water with skittish trout presents and how to overcome them.

I mentioned in the opening paragraph that tenkara is perfect for fishing these types of streams. The main reason for this is the thin diameter of tenkara lines. Compared to thicker, brightly colored plastic fly lines, tenkara lines are barely visible to the fish (and sometimes, even to the angler) meaning you run less of a risk of scaring fish. The thin profile casts almost no shadow and even a poorly placed cast will not scare fish anywhere nearly as much as a pile of weight forward or double taper conventional line. Simply choosing tenkara over conventional tackle will automatically give you an edge.

With no trees or other deflectors, meadows are notoriously windy. You can either consider yourself a victim of the wind, or make it your ally. With the light tenkara line, you can let the wind “cast” for you by fishing in the direction of the wind. If it’s blowing upstream, face upstream and lift your rod so the wind carries your line where you want to present it. The same thing goes when it’s blowing downstream. It might seem counterintuitive to fish downstream in low and clear water (because you’re in the fish’s cone of vision) but often, the wind will provide enough of a disturbance on the surface to offer you some camouflage.

This is easier said than done. Meadow streams often don’t have anything to hide behind, but if you can find a boulder or brush, use it to conceal yourself.

No trees or other cover? Lower yourself. Consider crawling up to where you want to fish instead of walking upright. And when you’re ready to cast, kneel or lie on your stomach. Keeping a low profile will not only keep you out of the trout’s cone of vision, but will also prevent inadvertent shadows that could spook fish.

Speaking of shadows…it’s always a good idea to pay attention to the position of the Sun. Remember, if the Sun is at your back, it can cast a giant-sized shadow of you right into the stream. And from the fish’s perspective, your shadow might as well be a huge raptor bearing down on them. As you approach, it’s always a good idea to note where you are in relation to the Sun’s rays and where you’re projecting a shadow.

Many meadow streams (even tiny ones) have undercut banks. Often, this is the only cover available so they are trout magnets. They offer the perfect lie: bulletproof protection from predators and the perfect vantage point to ambush food. Cast your fly along and into the undercut banks on any meadow stream and you’re practically guaranteed to hook up.

While larger flies with more robust hackle might work well in high-gradient pocket water where fish have a split second to decide if something is food or not, in slow moving clear meadow streams, they have the luxury of inspecting everything that drifts by. Not only that, but a big fly with heavy hackle (like a muscular sakasa kebari) won’t make a very delicate landing on the water. Flies that are smaller, have sparse hackle, and thinner bodies seem to work better probably because they take advantage of the trout’s generally poor vision. If it’s big and bold, it’s easier to dismiss as a charlatan. But if it’s small and sparse, the trout’s eyes have to work a little harder to pick out the details and chances are, your fly will be more convincing as a real insect.

If you’ve ever watched a heron stalk fish, you already know what I’m about to say. Their moves are 100% calculated to approach their prey without being detected. They lift their feet up and carefully plant them down with each step—without disturbing the substrate. They move their body slowly, blending in seamlessly with the background motion of riparian foliage blowing in the wind. Even with their high profile, they are able to sneak up on the wariest fish. If you want to be stealthy, you could do worse than emulating a heron.
Skinny meadow streams might seem daunting at first, but with a little practice and using these tips, you can have a successful day in a postcard-perfect setting.

What are your tips for fishing small meadow streams?