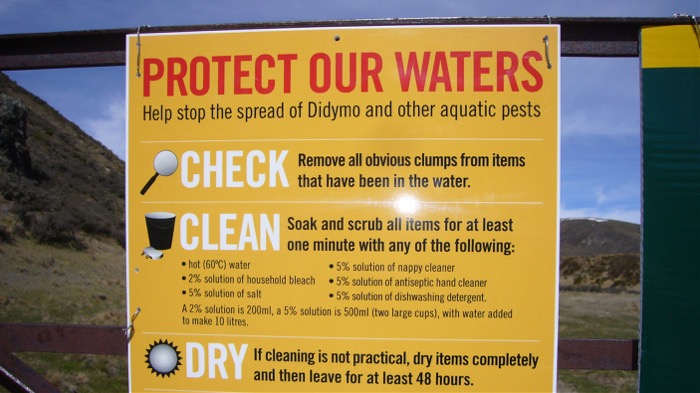 In my second ever guest post on this blog, I am proud to publish Sara Golden’s insightful response to a comment I recently made about the debate regarding the ethics of wearing felt-soled wading boots. Sara is an avid fly fisher based in Oregon and currently travelling Europe, exploring what the world of fishing has to offer outside of the US and Canada. When time allows, she enjoys writing about gear and fly fishing in general while always keeping the importance of conservation in mind. While she doesn’t operate her own blog at the moment she plans to do so in the future. I might not always agree with her points of view, but I correspond with her regularly and deeply respect her opinion, so I thought it my due diligence to publish this piece. I hope you find it provoking. -Jason

When it comes to wading boots, there are quite a few things you should take into consideration. Next to a decent drainage system and sufficient ankle support, there is one major decision you have to make if you plan on buying a new pair: “Felt or rubber soles?” To round this up let us take a quick look at what those two choices have to offer.

Starting with the controversial felt sole, their main selling point is traction. While the rubber that’s used for soles today gets constantly improved, it’s still not close to that sweet grip you have in a pair with felt soles. Although traction is the most important aspect of wading boots, we still see the steady increase of people that choose rubber over felt. The reason for that? There are definitely some areas where rubber takes the lead.

Fly fishing often involves longer hikes and in terms of longevity you will burn through felt soles in no time compared to rubber. Another fact playing into the rise of rubber is that -as stated earlier – it’s traction gets constantly improved. Vibram rubber, as used in the Simms G3 Guide Wading Boots, gets more and more popular and manufacturers like Redington start to use exotic stuff like crushed walnut shells for their rubber recipes. The hard rubber that was used for wading boots a few decades ago can’t be compared to the soft and sticky rubber that’s available today.

All that aside and hands down, there is one reason that weighs more than everything stated above: Felt starts to get banned all over the place. Missouri, Alaska, Nebraska, just to name a few and unlike many other things, that’s not just a weird US law. For instance, felt soles are banned all over New Zealand as well. The reasoning behind those regulations is that felt soles are suspected to spread invasive species.

Since you are reading this on a pretty popular fly fishing blog, chances are good that I am not telling you something new. You probably heard about the whole thing before and maybe you even read about or are directly affected of the recent Yellow Stone closure, triggering off a new discussion about the whole felt sole banning debate once again. So what exactly are those invisible but yet so dangerous little organisms known as aquatic invasive species. According to the National Wildlife Federation the definition of an invasive species is the following:
“An invasive species can be any kind of living organism, plant, insect, fish, fungus, bacteria, or even an organism’s seeds or eggs—that is not native to an ecosystem and which causes harm.”

To name a quite famous example you might have heard about: Rabbits in Australia. Yes, invasive species don’t always get spread by felt soles, who would have thought, but occur in any form in any environment. Rabbits aren’t native to the land down under and therefore lack natural predators.

The result is an uncontrolled population causing serious damage to the local flora and fauna. Similar but on a smaller scale this happens to rivers and lakes all over the US, with species like Didymo, Zebra Mussels, New Zealand Mud Snails and Whirling Disease replacing rabbits. The consequences are huge, our precious trout are dying in masses and as always if something bad happens, people are looking for someone to blame. While no one is saying fly fishers are solely responsible for this issue, there are quite a few out there, convinced that felt soles play at least a substantial role.

Why only felt soles? The surface of felt is predestined to trap small organisms like the Didymo algaes mentioned above. In addition to that, felt takes quite a bit longer to dry than rubber, which keeps those organisms moist and viable over a longer period of time. The worst part? Chemical disinfection treatments or just cleaning your soles properly doesn’t solve the issue. The governmental website of Minnesota even recommends freezing them for 24 hours before you use them in a different body of water.

While the whole topic was pretty much settled for me, I had an interesting discussion underneath one of Jason’s posts about a new pair of felt waders. While I layed out my point of view, Jason brought up a pretty solid argument: If invasive species would spread that easily, shouldn’t we blame birds, deer, moose and any other animal that constantly roams between different lakes and rivers before even thinking about felt soles? That really got me thinking, so I spend some time researching, since I wasn’t really satisfied with the first answer I gave.

It’s definitely a factor that fly fishing often involves travelling to distant places all over the world. You might use the same equipment in your local lake as you do one week later in a remote back country stream thousand miles away, or even on a whole different continent. I think we can all agree, that without proper cleaning and decontamination, the latter would be an irresponsible thing to do. A felt sole would be the perfect place, for that small but dangerous organism, to travel in a plane all around the world and attack native fish that aren’t prepared for it.

That’s only one part of the story though, what about invasive species spreading inside the US, from lake to lake or stream to stream? While the same deer probably wouldn’t constantly travel a few 100 miles between one lake and another, over a longer period and with all kinds of different animals involved, it would only be a matter of time until those invasive species spread, right?

And while this is certainly true, it’s not really a problem as long as this time frame is big enough. It’s evolution, successful species dominate and spread and that’s how our world works. If those species spread slowly and naturally the eco system has enough time to adapt to them and lakes and rivers can easily deal with all those algaes and micro organisms. The reason why we face those struggles today is that it all happens faster, catching fish unprepared resulting in massively decreasing bio diversity in some areas.

As stated earlier, no one in their right mind would blame all that on felt soles. Boats are a huge factor and generally every recreational equipment that tends to “travel” bigger distances between water bodies. While a lake might be able to fight one adventive species, in the wrong situation your felt soles might be the last straw that break the fish’s back.

Enough catastrophizing and all that being said, nothing of that is something to worry about, if the only places you use your wading boots are in your local waters. You also won’t trigger an ecological crisis just because you go on that weekend fishing trip one or two hours away. If you avoid already contaminated lakes and rivers and act responsible, there is really no argument against your favourite pair of felt wading boots.