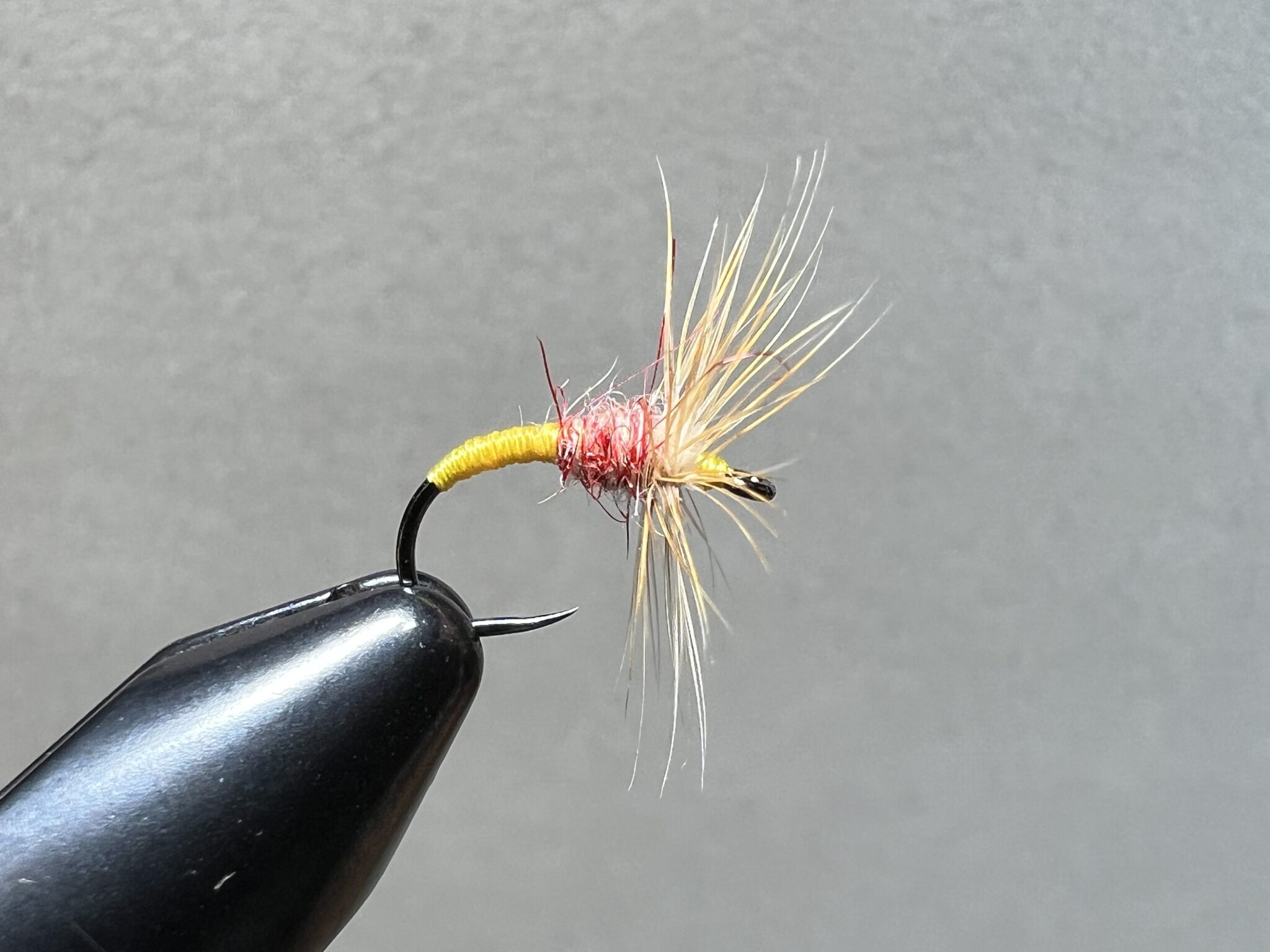 Many years ago, I was gifted a small bag of dubbing from an English acquaintance of mine. I had no idea what I was holding in my hand at the time and little did I know that it would eventually fuel a minor obsession that countless others had fallen into before me. He told me it was “authentic” dubbing for a fly called the “Tups Indispensable”. Of course, what I heard was, “Tup’s Indispensable” thinking that it was named after someone called “Tup” who must have invented the fly. 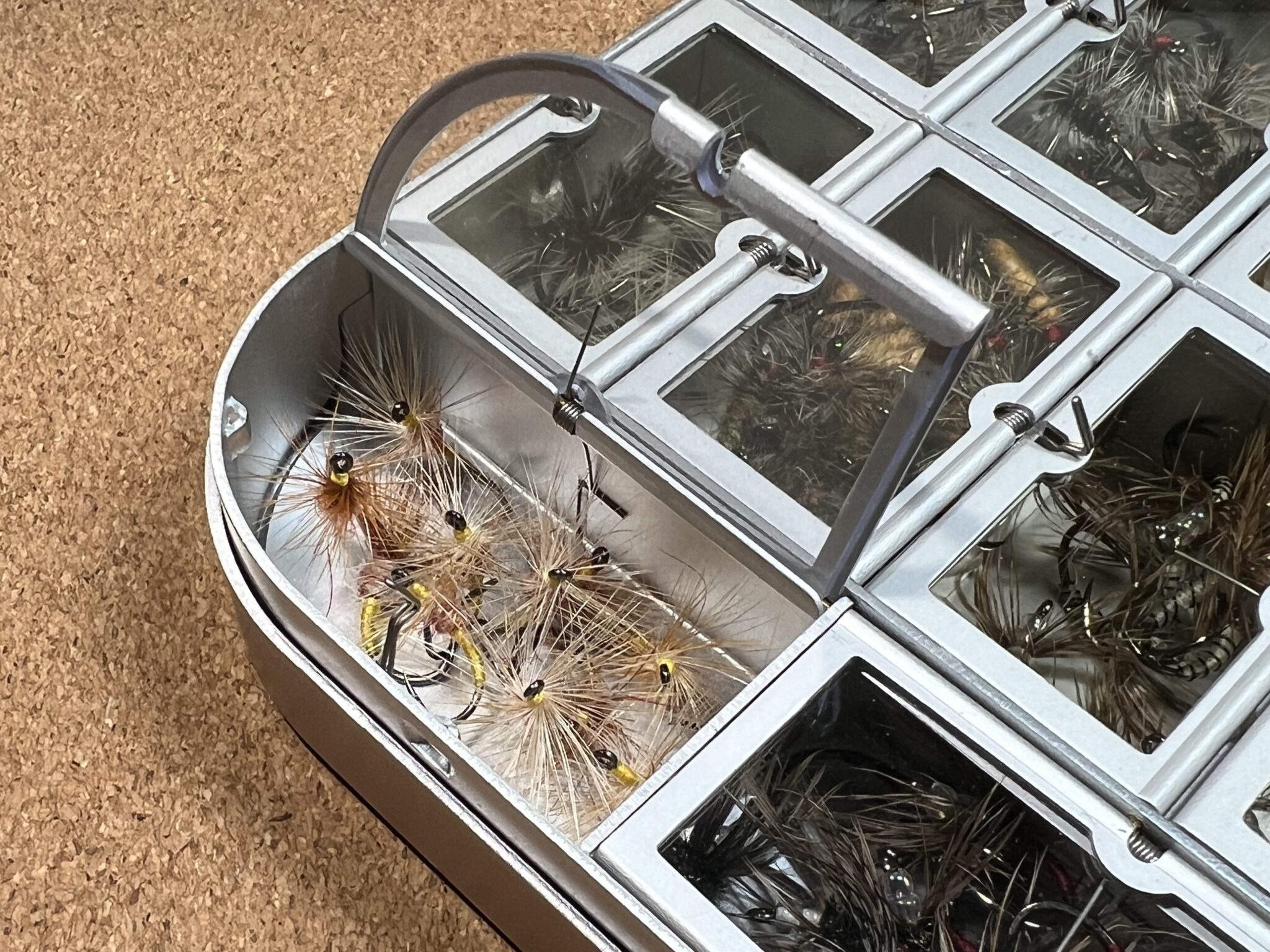 But the truth was something else. Something weird. It turned out that the “Tups (no apostrophe) Indispensable” was named so because one of the ingredients–urine-stained ram’s wool from the nether regions (“tup” is a Scottish word for ram). That detail was curious for sure, but not enough for me to give it much more than a fleeting thought. So, I just threw the bag of the strange stuff into my dubbing drawer to be forgotten for several years. Little did I know how valuable that little ziplock bag really was.

Eventually, I started hearing the name “Tups Indispensable” over and over again as I studied some of the UK fly fishing magazines (hand-me-downs from my boss). The pattern became increasingly interesting to me the more I read. It seemed to have earned a legendary status in England and I soon became intrigued. I exhumed the old dubbing and tied a couple of flies with it just as an experiment. It turned out the fly was an absolute cracker during my local sulphur hatches and I just fell in love with its color scheme–a subtle pink-ish/yellow that glowed brilliantly when backlit during evening hatches. I vowed to tie more, but somehow, just let the notion fall by the wayside (again).

After I moved to Colorado, my interest was renewed when an image of it came to mind for no apparent reason and suddenly, I felt compelled to revisit the fly. Unfortunately, the package of dubbing I got from the Brit was lost sometime during the course of several moves. I searched online for it (as many have) only to find the genuine stuff impossible to buy. There were a few commercially available attempts at “tups dubbing” but they were wrong. Though I no longer had a tangible reference, the image of it was etched in my mind and these did not look at all like what I remembered.

The only solution then was to blend it myself. I’ll spare you the lengths I went to to finally settle on what I now use for my Tups Indispensables (which see). It’s about as close as I can get to the precious dubbing I once held in my hand and so ignorantly cast aside. But what makes this dubbing so special?

The Tups Indispensable was invented at the the turn of the 20th century by commercial fly tyer R. S. Austin in Tiverton, England. The fly quickly became incredibly popular to imitate pale yellow mayflies and anglers swore by its “magical” translucent properties. They became so popular that Austin soon found himself sick of tying them, confessing to fly fishing legend G.E.M. Skues that his own home river “stank of Tups Indis­pen­sables from Maiden Newton [its headwaters] to the sea.”

The actual recipe remained a closely guarded secret for more than three decades before it was entrusted to his friend Skues and made public. Prior to that people struggled to match the dubbing’s seemingly ethereal radiance but Austin was quick to point out that they all fell short. And today, even though we now know the original recipe, many still struggle to find the right ingredients, so “substitutions” have almost become synonymous with the dubbing.

Austin’s magic blend is still a little vague in terms of a formula. But we know it consisted of the stained ram’s wool, spaniel fur, a little fine, “pale pinkish” hare’s mask from between the ears, and red seal. The early incarnations of the dubbing called for mohair, but Austin later switched it to red seal. And sometimes, he also added yellow seal but eventually thought it unnecessary.

My proportions are slightly different as well. Austin’s flies were about 2/3rds dubbing and 1/3rd thread for the body. But I tie it more like sakasa kebari proportions which is vice-versa: 2/3rds thread and 1/3rd dubbing.

I tie this fly in a “futsu (stiff hackle)/sakasa” style sans the tail of the original to make it more tenkara-esque and with either dun or ginger hackle. Austin referred to the hackle he used as a “rusty dun” but like the elusive dubbing, the rusty dun commercially available today varies greatly and it’s hard to pin down exactly the one closest to his. So most modern anglers have settled on either ginger or dun.

The original was tied in both dry and wet fly versions–the main difference being in the stiffness and density of the hackle. I chose the futsu style for my interpretation so it can be fished as either without having to switch flies. 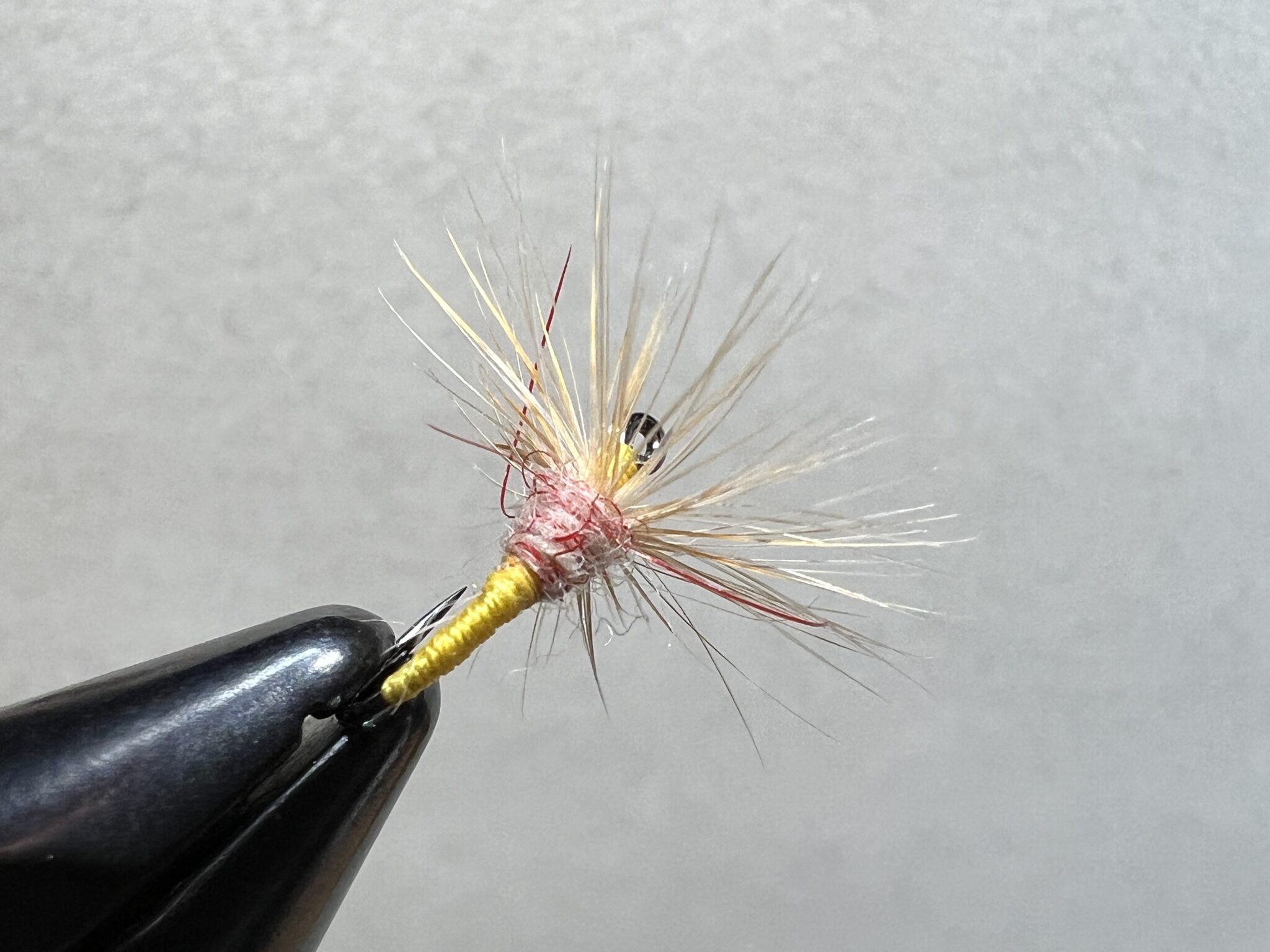 True to its “magical” reputation, here’s what the fly looks like when backlit. It glows! Imagine serving one of these up to rising trout during an heavy evening sulphur hatch. 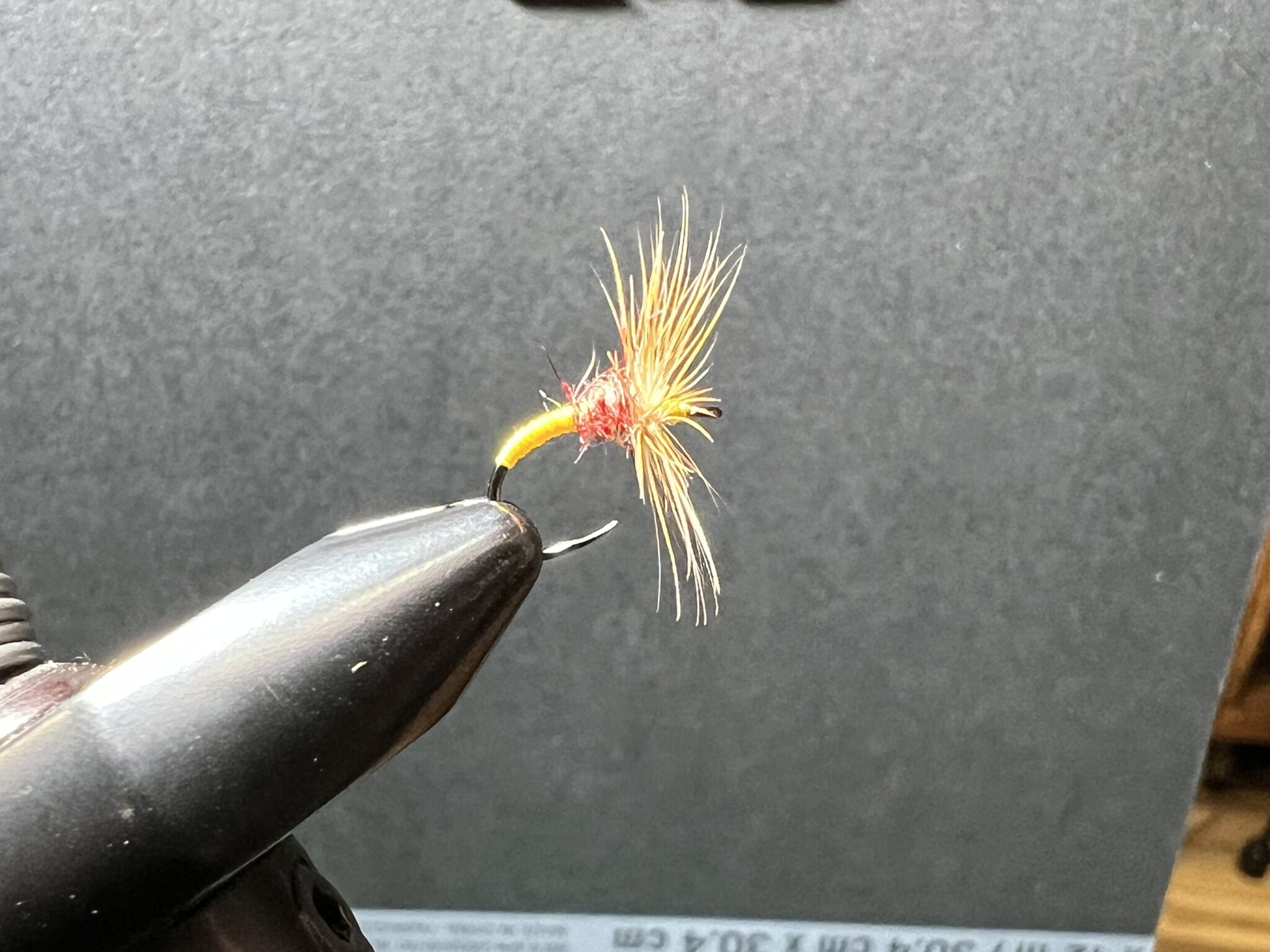 Just for comparison, here’s an old fly I tied using dun rather than ginger (I prefer the ginger): 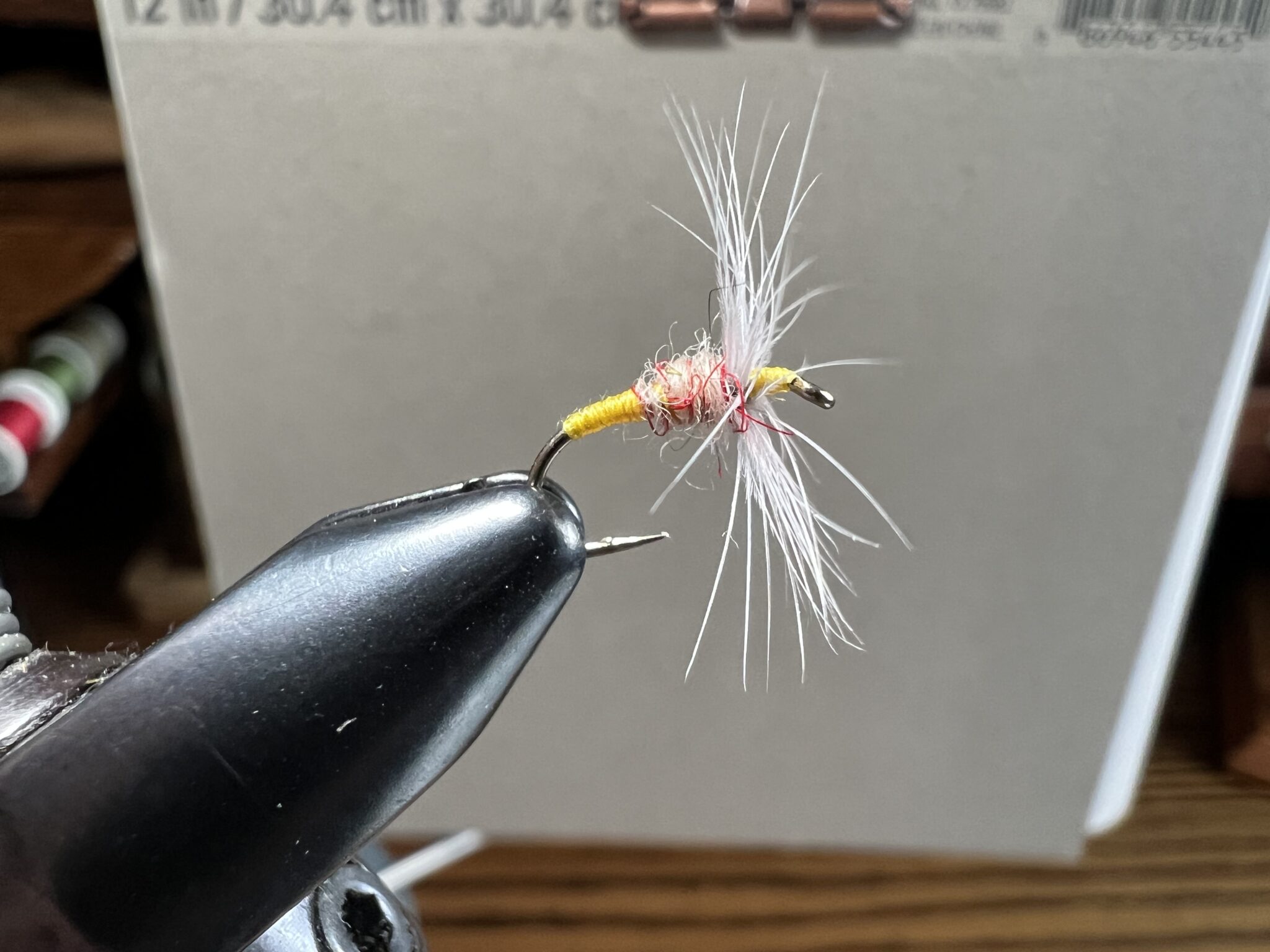 Aside from the lack of tail, I tried to remain as faithful as possible to the original–at least in terms of the dubbing. The one exception I had to make was the urine-stained wool from the ram’s [cough] … “down there”. For this, I used some old ram’s wool which I dyed light yellow with lemonade flavored Kool-Aid (making do with what I had just like the early tenkara fishermen). While I can’t do a side-by-side test to see if it’s as translucent as the real deal, I imagine it’s got to be pretty close (or close enough). This combined with the translucency of the red seal fur are key to the dubbing’s siren song.

How to blend it

Note: I highly recommend making your mixture with a small coffee grinder for a more consistent blend that is easier to dub. Also, these measurements are approximate and require to you to pay attention as you blend to see how the color is changing as you add different materials. Remember, you can always add more as you go, but you can’t take it out. So it’s better to start off frugal and adjust as needed rather than just throwing everything in the grinder at once. Think cooking rather than baking. 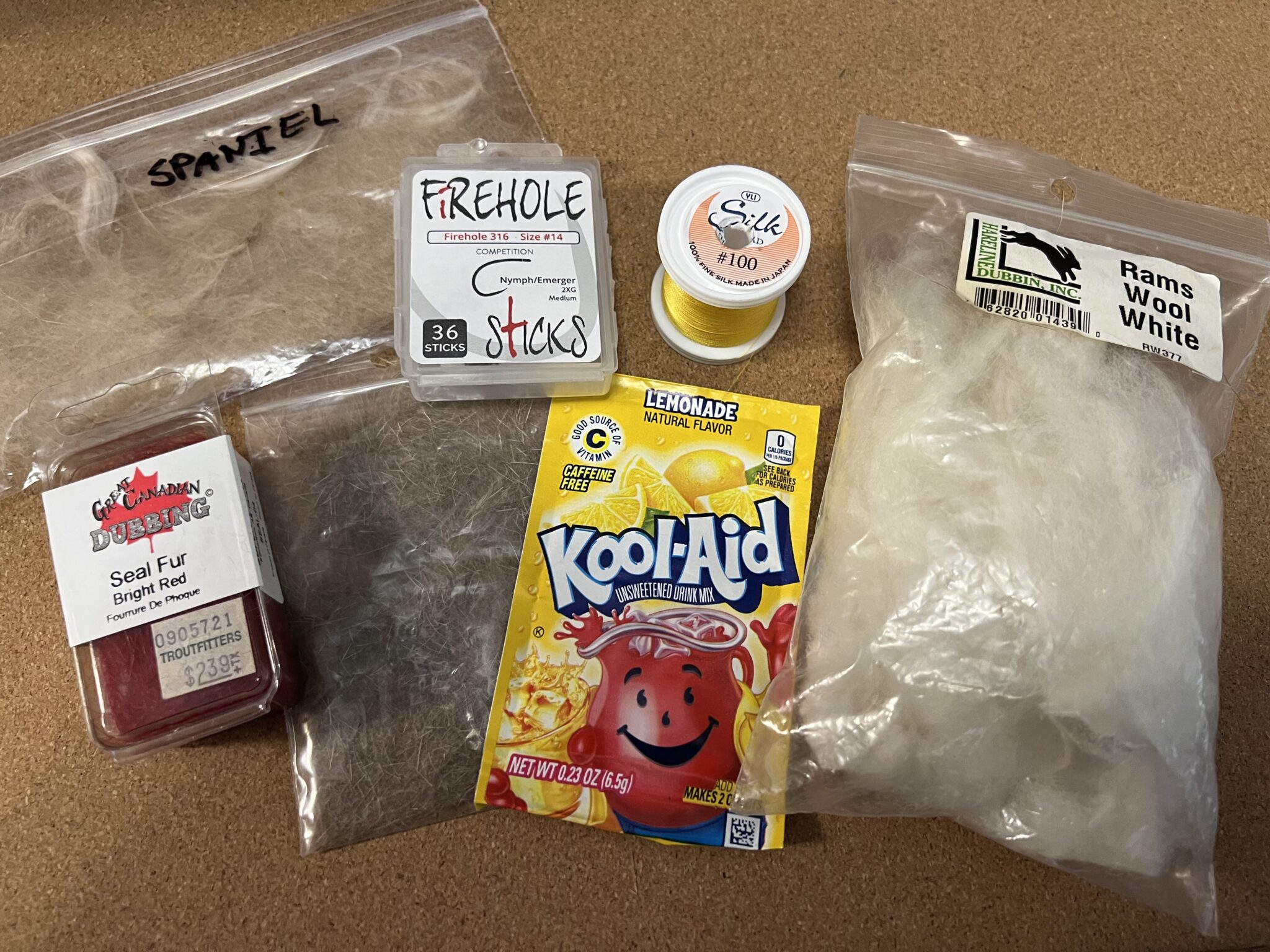 The camera doesn’t do it justice, so, I took pictures of my blend with different colored backgrounds what it looks like against different backdrops. 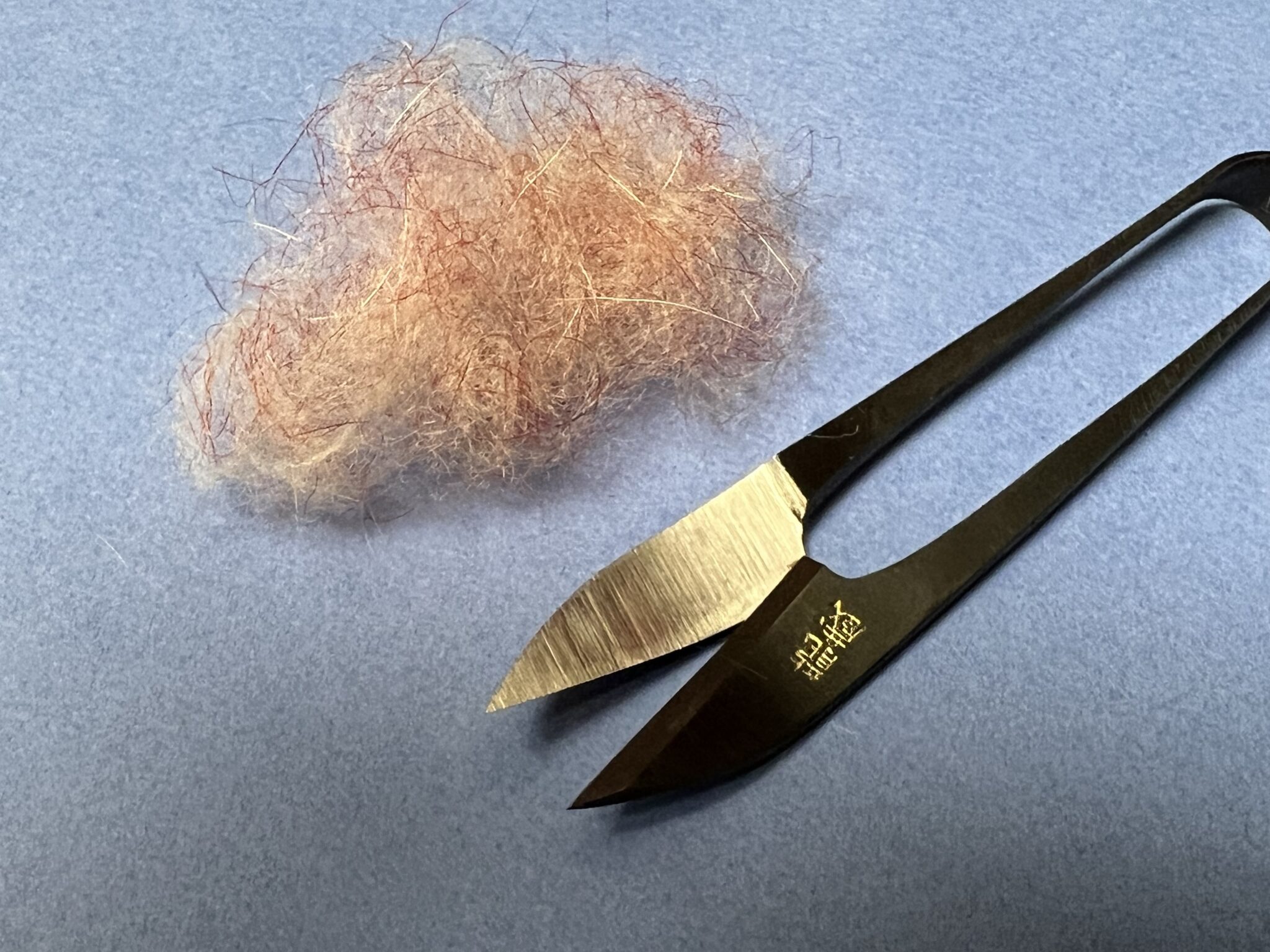 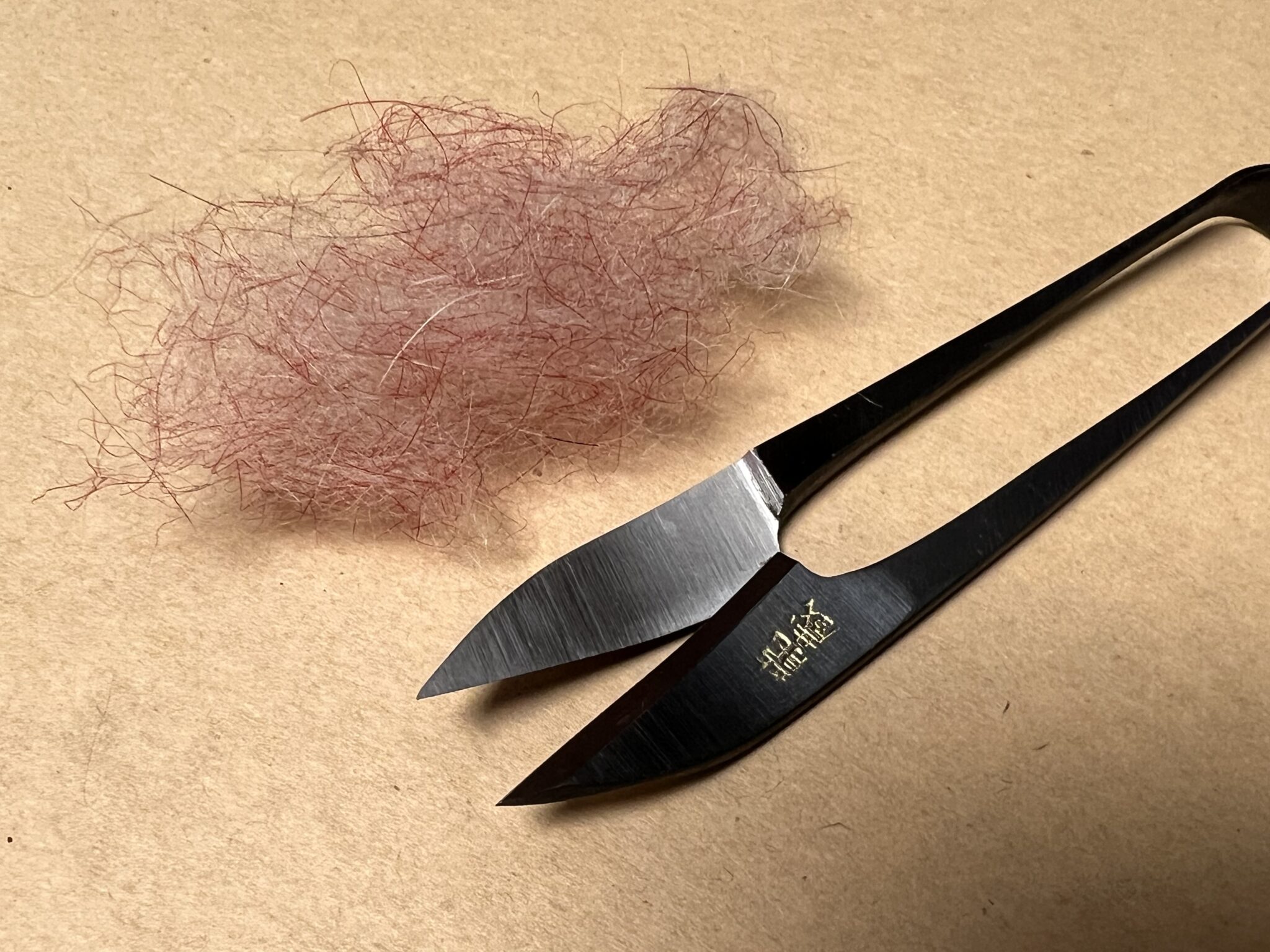 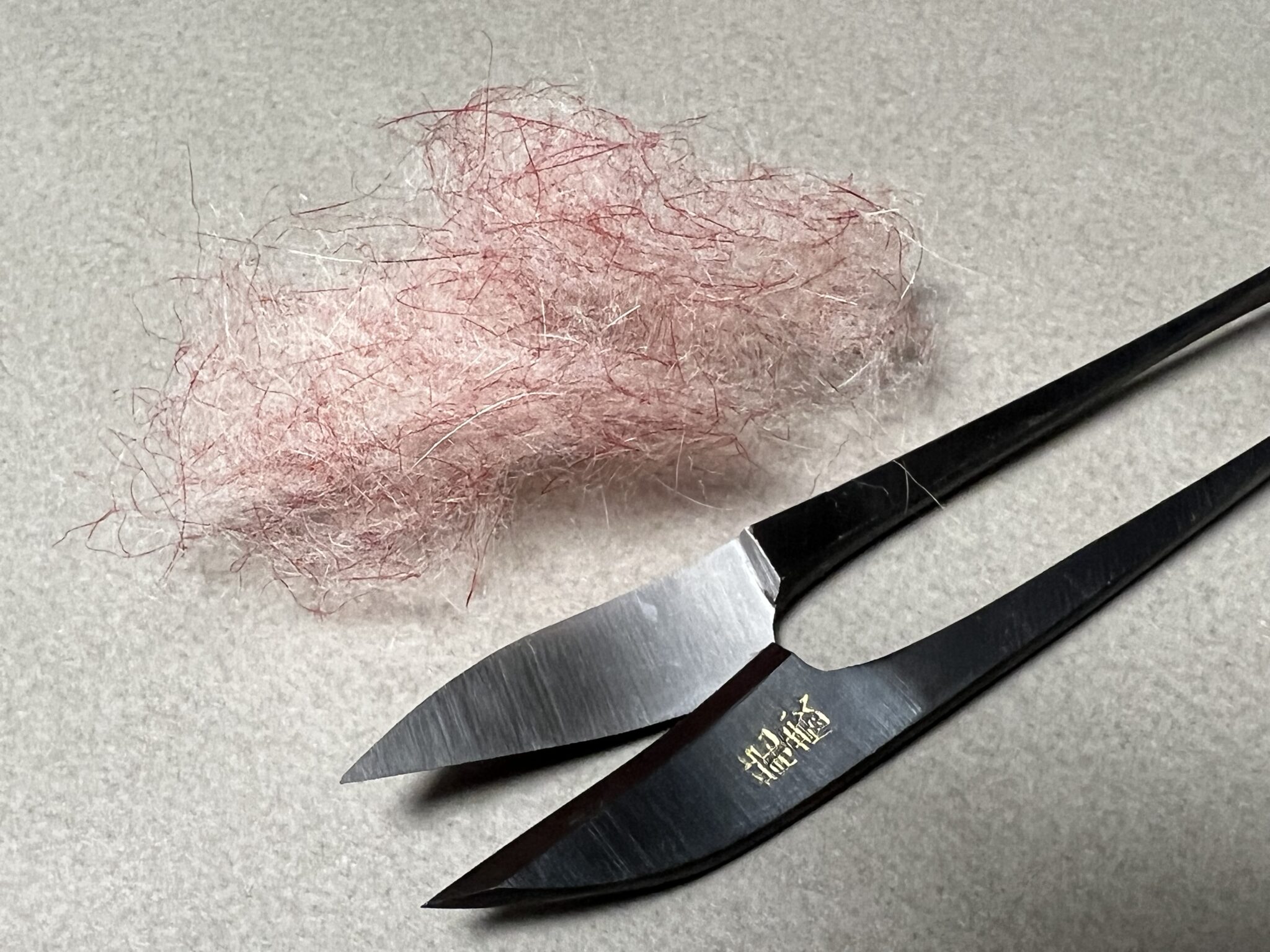 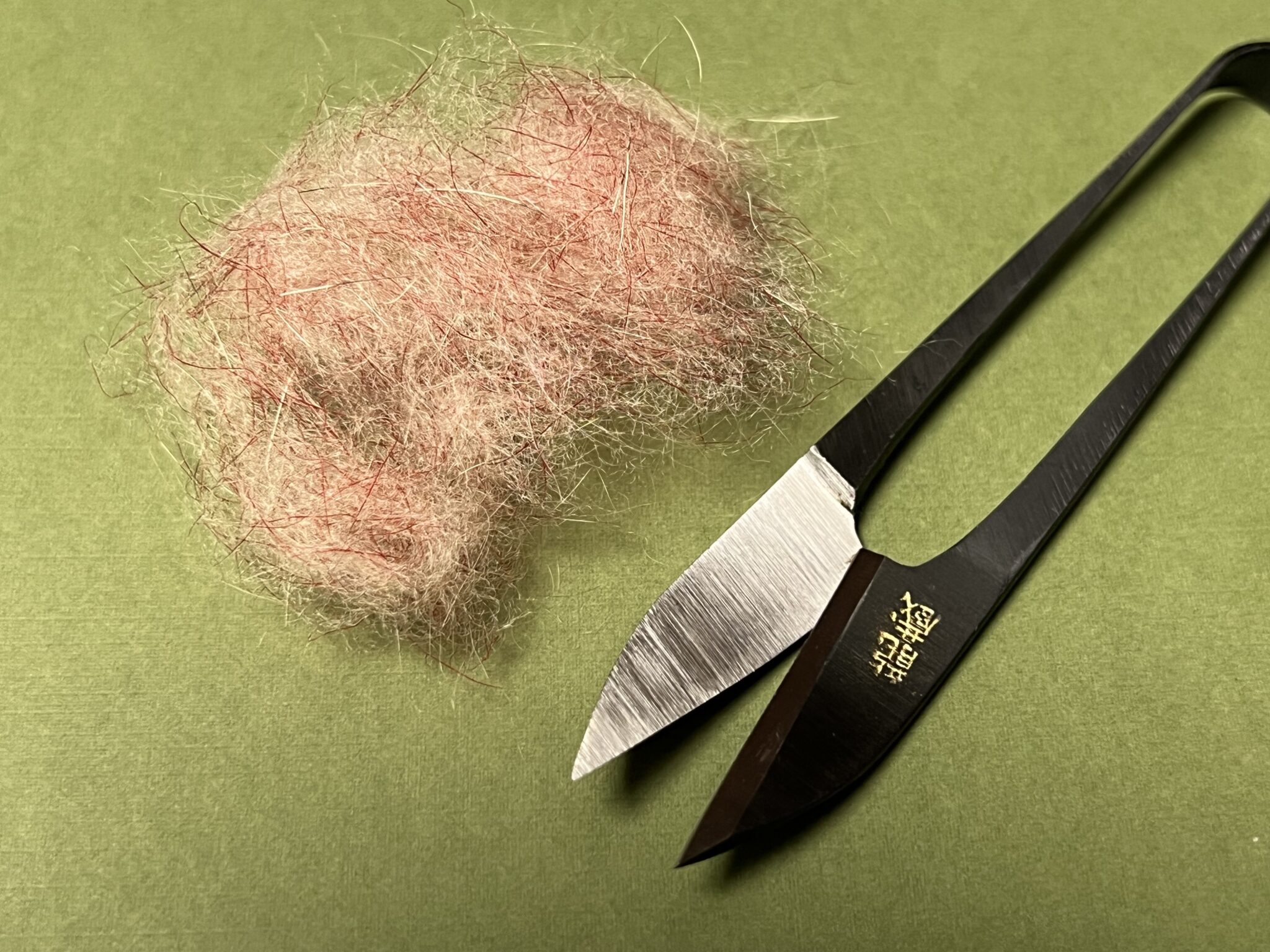 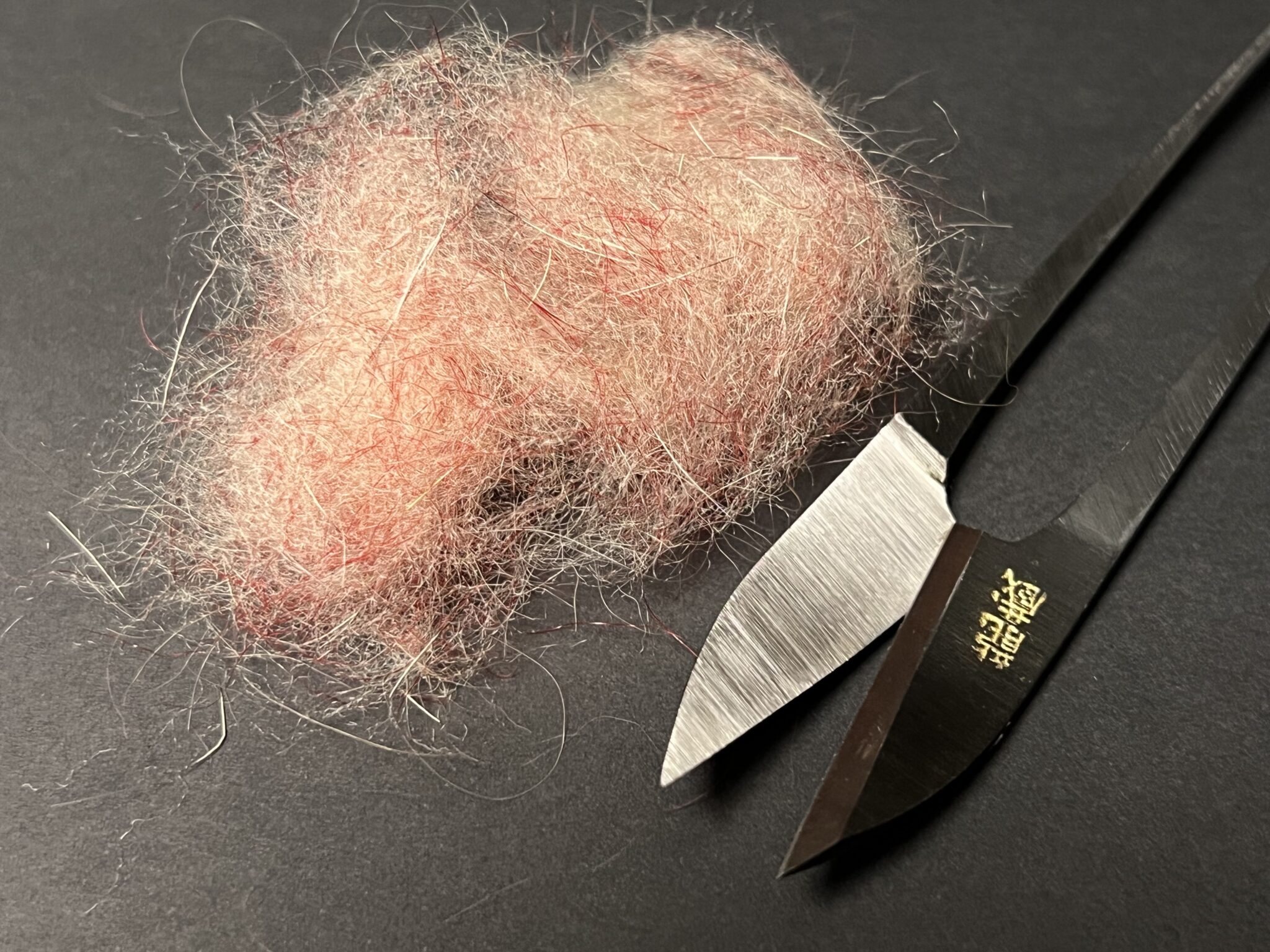 To be completely honest, I’ve only fished this fly in an upstream or downstream dead drift. I’ve never swung it like a wet fly though I imagine it would work swimmingly. I definitely plan to try that and some other experiments this year like dapping to imitate egg laying flies. I’m happy with the materials and I know it catches fish. But I’m curious to see how it will perform with different sasoi techniques. I’m positive it will be a great general attractor here in Colorado as well. 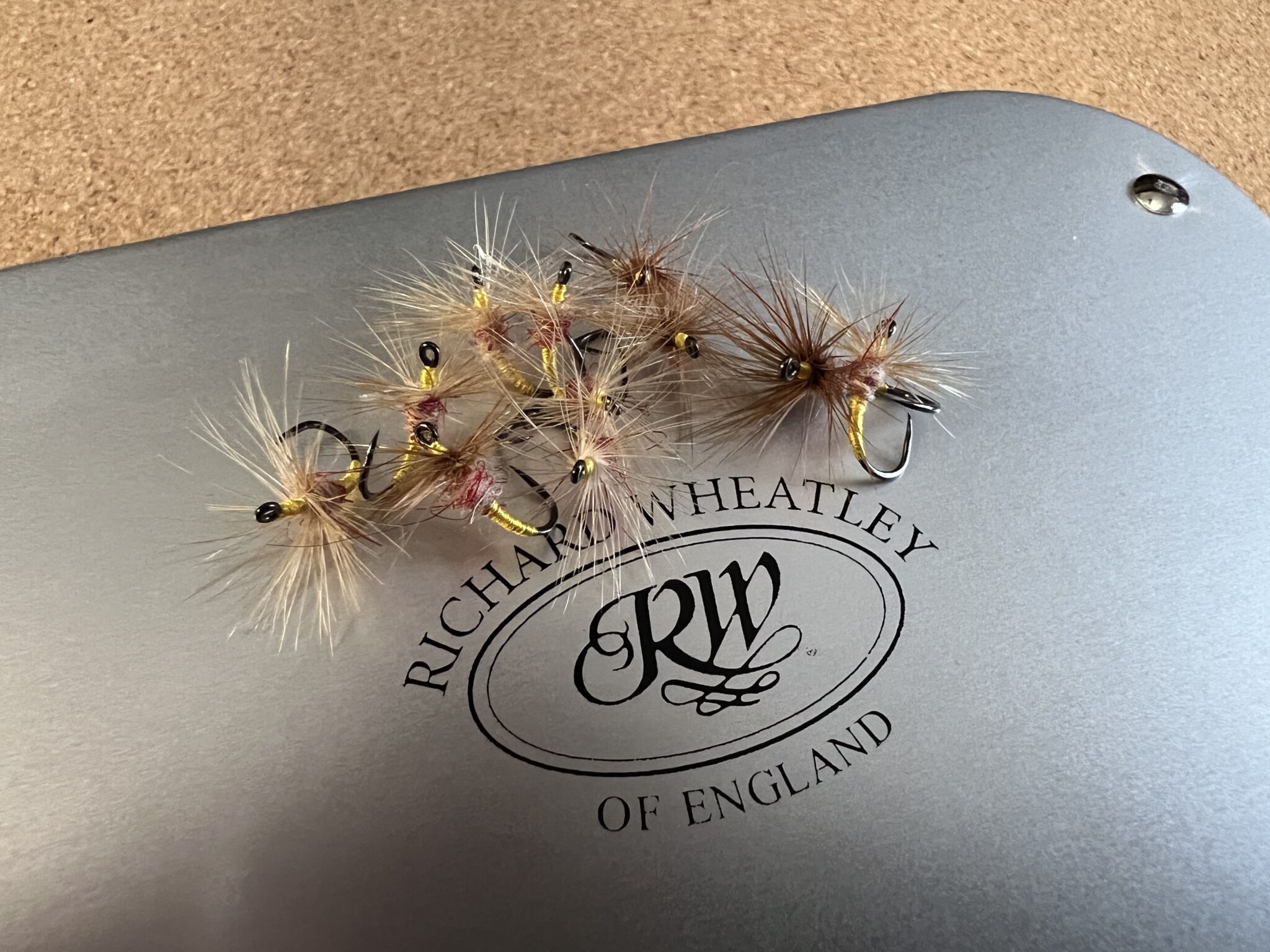 If you’re at all interested in fly history, you owe it to yourself to Google the Tups Indispensable. And if you love fishing classic flies, you owe it to yourself to fish with one! It’s one of those venerable patterns that’s lived up to its reputation with fishers for well over a century, and has left an indelible mark in the annals of fly fishing. To tie or fish with one is to fish with a piece of our sport’s history.