The “Eleventh Color” of Tenkara 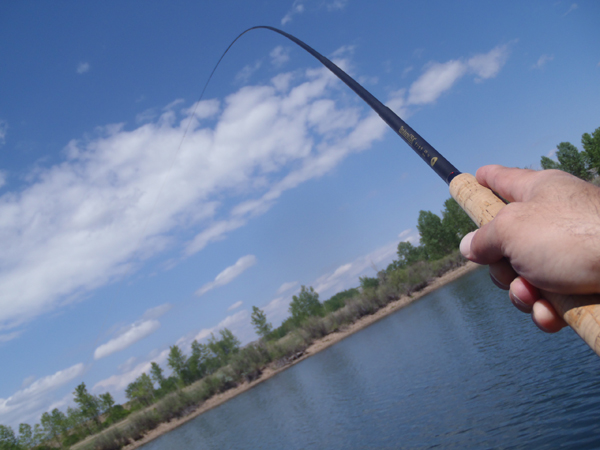 In Japan, tenkara has been very narrowly defined in terms of gear, technique, and application.  The gear part of the definition includes using a long rod, no reel, and simple, unweighted flies.  The technique part includes things like using rapids and waterfalls to sink flies rather than weight, watching the line rather than using a strike indicator, relying on a one-fly approach rather than matching the hatch, and employing various presentation techniques rather than switching flies to induce a strike.  I have studied and practiced these things in order to try to understand tenkara, yet, it is the third part of that definition that doesn’t fully resonate with me:  the application.

Ask most tenkara anglers in Japan about tenkara bass fishing and you’ll likely get the response that tenkara fishing is only for trout.  And to put a finer point on it–small trout in mountain streams.  For many, the concept of using tenkara for warmwater fish doesn’t register.  And this makes sense since the small mountain streams of Japan are where tenkara was born.  But since its introduction to the West, many anglers have used tenkara gear and techniques for many other types of fish in warmwater and even saltwater.  Purists will say that fishing with a tenkara rod for bass isn’t tenkara fishing; however, I challenge this claim and hope to propose a more inclusive way of talking about using tenkara gear and techniques beyond the finite world of mountain streams.

First, let’s back up a little and consider fly fishing history in the West. Like tenkara, early fly fishing was once considered a “trout only” technique too.  Purists scoffed at the idea of using fly gear to catch uncouth fish such as bass and the like.  And to even suggest using fly tackle to pursue saltwater might have been unimaginable (if not sacrilegious).  Yet today, saltwater fly fishing is a multi-million dollar industry.   People have landed scores world-record size fish on fly gear.  And catching carp (scoff) on a fly has become it’s own elite fly fishing sub culture.  So how did fly fishing go from being a stream born pursuit to a universal way to catch fish?

In part, one could say that the development of new technologies helped.  If the only tackle you have available to you consists of a bamboo rod and a horse hair line, it’s pretty easy to see why you might scoff at the idea of chasing tarpon.  But advances in rod material, lines, and reels allowed fly anglers to push the envelope of fly fishing and expand it beyond trout.

While technology certainly played a role, that wasn’t the main reason fly fishing evolved into a multi-species sport.  After all, someone still had to actually “push” the envelope.  There had to be the first person to look at a 100 lb. tarpon and say, “I’m going to figure out how to catch that on fly tackle”.  In other words, it was the pioneers that actually drove the evolution–people who saw the potential of fly fishing to be so much more than merely a stream fishing method.  And when tackle technology caught up to their vision, they were able to push fly fishing into new frontiers.

Now let’s go back to Japan.  Even though I said that tenkara has a pretty narrow definition, there seems to be some leeway given.  Today, most people in the West are either told or tell themselves the story that tenkara follows a certain set of rules.  You don’t use weighted flies, the rod must be “long”, flies are reversed hackle wet flies, dry fly fishing is not tenkara, etc.  However, with very little research on the internet, you can find many examples where Japanese tenkara anglers don’t follow the script of this story.  In fact, many fish weighted flies, dry flies, and not all tenkara flies have reversed hackle.

Even among purists, there is a recognition of some deviation from the script.  In a recent post on the Tenkara USA blog, Daniel Galhardo writes:

Ask 10 tenkara anglers to show them the fly they use and they will show you ten different tenkara flies. Thus, in a play of words, it is often joked that “tenkara has ten colors”.

In fact, tenkara flies and techniques can vary from region to region (and angler to angler) in Japan.  There aren’t literally “ten colors”–it’s just a metaphor to describe personal preferences.  While none of them seem like a radical departure from what is easily recognizable as tenkara, at least this allows for some breathing room in the definition.  Yet, the underlying dogma of tenkara as a trout-only pursuit remains.

Ever since tenkara was popularized in the West by Galhardo, western anglers have been experimenting with it.  For the most part, I think this is a good thing.  There have been hits and misses but I think the most valuable thing that has come out of it so far has been to push tenkara beyond the trout stream.  To date, people have successfully caught a caught a wide variety of species using tenkara gear and techniques including bass, panfish, pike, carp, lake trout, salmon, and even saltwater fish that many previously considered impossible to land without a reel like tarpon and bonefish.  In short, we in the west have pushed that envelope and demonstrated that tenkara can indeed be used for more than just trout.   But for purists, I don’t think the question is if tenkara “can” be used for such species.  I think their objection is that it simply isn’t “tenkara”.  And semantically, they’re probably right.

Yet I think it’s a shame that a fishing system as effective and enjoyable as tenkara should be pigeonholed.  And since the empirical evidence is already in that it can also be highly effective beyond just trout fishing, I suggest we find an inclusive way to refer to this new incarnation of tenkara.  Remember the “ten colors” of tenkara?  I propose that rather than labeling using tenkara gear and techniques outside of mountain streams “not tenkara”, we simply call it “the Eleventh Color”.

The Eleventh Color doesn’t have a strict definition per se.  It’s simply a variation that subscribes to the basic principles of tenkara, but allows for the use of tenkara in applications outside of mountain streams without a value judgment or semantic argument.  To put it another way, if traditional tenkara is the Orthodox Church, then the Eleventh Color is Universalist Unitarian.

A contemporary purist tenkara angler might point to me fishing for bass with a tenkara rod and say, “that’s not tenkara fishing” and then go on to make their argument about the tradition of the sport.  I would simply point back at them and ask what is so “traditional” about their carbon fiber rod, fluorocarbon line, and chemically sharpened hooks.  To me, tenkara is not so much about the actual gear or application as it is the spirit.  As long as you’re fishing with the spirit of tenkara, I think the application becomes irrelevant.  In other words, I take a more descriptive rather than prescriptive approach to tenkara.  And that is the idea behind the Eleventh Color.

There’s a fine line between innovation and bastardization, but as far as I can tell, anglers who have pushed the limits of what tenkara gear can do are not doing so out of any kind of disrespect, ignorance, or arrogance.  On the contrary, I see it being done out of a deep love of the sport and a desire to challenge themselves.  I can’t think of anything much more humbling than going up against a tarpon with a tenkara rod and no reel.  And after all, isn’t challenging oneself and relying on one’s own skill rather than technology part of the true spirit of tenkara?

We are now writing the book on tenkara in America—all of us early adopters.

This is indeed an exciting time and it will be interesting for all of us early adopters to look back after twenty years and see what shape tenkara has taken.  It is up to us to decide what course takes not just in America, but in the West in general.

Traditional tenkara will always exist.  Some might see new iterations of it as a threat to tradition.  But I don’t think this is the case.  I believe the Eleventh color will be able to peacefully coexist with pure tenkara because they need each other.  It’s sometimes said that the popularity of tenkara in the West “saved” tenkara and certainly, the Eleventh Color couldn’t have existed without traditional tenkara.  Probably a major reason that tenkara became so popular in the West is that many didn’t “follow the rules”.  They interpreted tenkara in their own way and forged a new tradition. If anything, this didn’t cancel out the traditional definition of tenkara, but breathed new life into it. I suspect that strict dogma would have certainly impeded (if not prevented) the popularity of tenkara in the West.

All of this might seem unsettling to some purists and I’m not forcing this idea on anyone.  After all, there are at least ten other colors to choose from if you don’t like this one.  But to those who believe that it’s OK to push the envelope rather than merely preserve tradition for tradition’s sake, consider the following: where will tenkara be in twenty years if we continue to expand its horizons?  Where will it be if we don’t?