The Myth of The Bottom Dredger 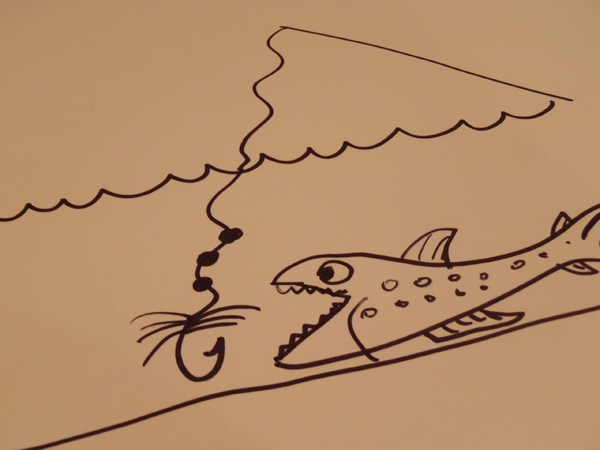 In my recent post about a new tenkara nymph line, someone asked if I used weight to get my flies to sink.  I replied that I do use copper wire in some of my flies which helps them sink a little better but first and foremost, it’s ribbing to created a segmented look.  I’d hardly call a fly with 5 turns of copper wire “weighted”.  If I really wanted to make Titanic flies, I’d use a lead wire underbody or a tungsten bead.  I also stated that I never use split shot.  They said that all the books they’ve been reading about nymphing mention that you need to use weight to get the fly into the strike zone or you will not reach the fish.  That comment gave me great pause for thought because,  A: That was exactly what I was told when I was learning fly fishing, and, B: I know it’s not true (well, not 100% true anyway).

My nymphing miseducation was founded on the assumption that your fly needs to be dead drifted right along the bottom to be effective.  The motto was, “if you’re not getting snagged, you’re not fishing deep enough.”  Basically, keep adding split shot until you start getting snagged on the bottom every few casts and then you’ll know you’re in “in the zone”.  Many referred to it as “dredging the bottom”.  A slightly less elegant way to describe it was “chuck & duck” since the obscene amounts of weight at the end of the line would produce horrible, out-of-control casts that made you look like a hapless amateur and wish you had a helmet and goggles.

For years, I thought that was what nymphing meant. And although I never enjoyed that type of fishing, it did produce consistently so the allure was hard to discount.

Fast forward to a better understanding of entomology, ichthyology, and another funny sounding word: tenkara. I realized that the narrative I’d been told wasn’t the full story.  After fishing a full year using traditional tenkara techniques (almost) exclusively, I was catching just as many fish–without split shot, stike indicators, and all the other stuff I thought was necessary to fish subsurface.  I proved to myself that technique, observation, and confidence outweighed terminal tackle and gear when it comes to catching fish.  That was a milestone for me and I think I can distill it down to a few simple observations…

1.  Fish don’t always hold on the bottom.  I used to think that fish were either feeding right on the surface, or holding to the bottom.  But after a lot of observation in the field and watching a lot of underwater video, I learned that trout hold at all different depths in between—not just the two extremes.

2.  Aquatic insects drift through different levels of the water column.  Drifting insects can be hard to observe in the field but after watching the Bugs of the Underworld DVD, I was really surprised by how buoyant nymphs were.  They don’t always tumble right along the bottom.  They can be found at all depths in a stream depending on the dynamics of the current and stage of emergence.  This might be a partial explanation of #1.  The fish are going to hold where the food is.

3.  Fish move!  One narrative of nymphing says that you have to deliver the nymph right on a trout’s nose for them to take.  But all last season, I had fish enthusiastically move to my fly from as much as five feet away!  Of course not all fish will do this (especially if the water is 35 degrees, for example) but if you use an enticing enough presentation, you can get fish to come to your fly in many cases.  You don’t always have to spoon feed them.

4.  You can sink an unweighted fly other ways.  Tenkara anglers use technique rather than tackle to help sink their flies.  The most basic method is to simply cast further upstream from the fish than you normally would and extend the drift to give the fly more time to sink.  A more interesting technique is to cast uspstream of a waterfall or plunge pool and let the force of the current pull the fly under.  Here is a short video of Daniel Galhrado from Tenkara USA explaining this method:

You can also tie your flies on heavier gauge hooks or use more absorbent materials in their design to help your fly sink.  And, of course, you can always use a little copper or lead wire to get them down if you want.  But you still don’t need shot.

5.  Ancient Tenkara Anglers didn’t so neither do you.  Early tenkara anglers earned their livelihood by catching fish and they didn’t use any weight.  Obviously, they were able to feed their families without using split shot so it stands to reason that the recreational angler (i.e. us) should be able to do the same.

I’ve just listed some reasons why you don’t need split shot.  But I think there’s one very important reason you might not want to use it.  It’s too limiting.  Consider #1 and #2 above.  If both the fish and the insects are at varying depths, does it make sense to limit yourself to fishing just the bottom?  Sure, you can add or remove split shot and adjust the position of your strike indicator to achieve different depths.  But personally, I’d rather fish more and fiddle around less.

I much prefer having one rig that can instantly fish at different depths.  I think this is one of the greatest advantages the tenkara method has to offer.  It allows you to spend more time with your fly in the water, and where the fish are in the water without having to re-rig or fine tune terminal tackle.  Of course, it helps if you’re using a fly that can wear many hats.  And that’s why I think a generic looking sakasa kebari is the most versatile subsurface pattern if you’re going weightless.

Like any maxim in fly fishing, “Split shot is unnecessary” isn’t 100% true in every situation (is anything?).  And it may not be true for you.  If you absolutely need to get to the bottom of an 8 ft. pool, you’re going to need some serious lead.  But for the tenkara friendly small streams I fish, I have never found the need for shot.  Not once.  If I can’t get the fly deep enough, I can usually coax fish up by mixing up my presentation.  And if I did ever come across a pool too deep, I’m content to let those fish be and more on to shallower water.

Lee Wulff once said, “trout deserve the sanctuary of deep water.”  I’d rather let them have it, and enjoy casting an elegant line unencumbered by lead (or goggles).