Is #12 the “Goldilocks” Size for Sakasa Kebari? 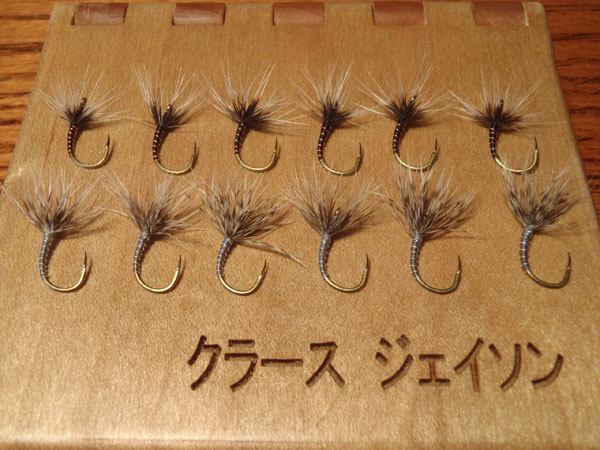 In western fly fishing, a lot of emphasis is placed not only on the fly pattern, but also on fly size.  It’s considered standard practice to carry both a wide variety of patterns and a variety of sizes of each pattern.  The mentality seems to be that if you don’t have a good selection, you’re underarmed.  You brought a butter knife to a gun fight.  Yet many Japanese tenkara anglers only carry one pattern in only one size.  And they catch just as many fish as their western counterparts.  So, it begs the question:  does fly size really matter?  And if it doesn’t, which size is the best all around choice?  As someone who used to carry at least 3 or 4 sizes of each of the 50+ patterns in my vest but who now basically only fishes one size, I have come to some conclusions…

The last three years of fishing for trout exclusively with tenkara have taught me that you don’t have to match the hatch to catch fish.  Hyperbolically then, I say that the size of the fly doesn’t matter.  But what I really mean is that it doesn’t matter as much as we think it does.  If you want to catch every single fish you come across, then sure–you could sit there and keep tying on different patterns and different sizes over and over again until you finally get that stubborn trout to take.  But that’s now how I prefer to fish.  I like to move a lot, cover a lot of water, and have no problem forsaking a fish that refuses my fly after three or four casts and moving on to the next one.  Another thing tenkara has taught me is to not waste so much time trying to catch every fish I see.  It’s better to move on to a more cooperative fish than flog the water to death on one that doesn’t like the particular fly I happen to have on.

So if you want to end the madness of carrying a million sizes of each pattern, which size is the best choice?  In my experience, it’s a #12.  And here are some of my thoughts on why:

As an added bonus, #12 flies are a comfortable size to tie and even with failing eyesight, I can crank out a dozen #12 sakasa kebari to replenish my fly box without it feeling like a chore.  Probably 99% of the sakasa kebari I fish are #12 (or the Japanese hook equivalent of about a #7 or so) and so far, I haven’t found the need to obsess about fly size like I used to.  To date, the empirical evidence that “fly size doesn’t matter” has been liberating.

What is your favorite size for sakasa kebari?