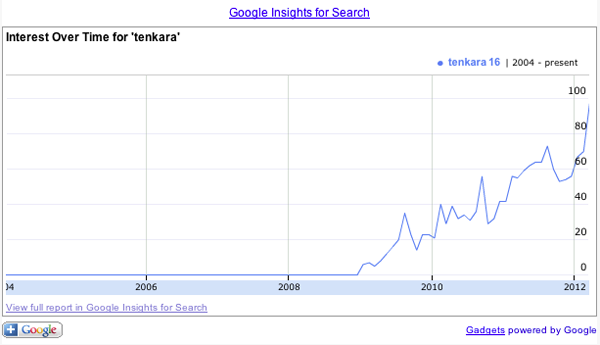 Here is a an interesting chart I made using Google Gadgets showing the number of global searches for the keyword “tenkara” since 2004.  Not surprisingly, no data shows prior to 2009 (the year Tenkara USA was founded).  Keep in mind that the numbers on the y-axis are not the actual number of searches, but normalized data compared to the total number of searches done on Google over time.  I’ll spare you the boring data analysis.  Let’s just leave it at the fact that this is clear proof of the explosion in interest in tenkara over the last three years.

Look at the spike in the beginning of 2012 (don’t you wish that were your stock?). The climb directly corresponds with Tenkara USA’s recent participation in major trade shows.  With the Tenkara Summit coming up in July, word of mouth spreading, an increase in mainstream media publications on tenkara, and Daniel’s marketing efforts at the trade shows, I predict 2012 will be a great year for tenkara.  And if Google is any litmus test (do we even doubt that?) it will be interesting to revisit this data in 2013.  Tenkara…the 2,000 year old fad.  LOL.