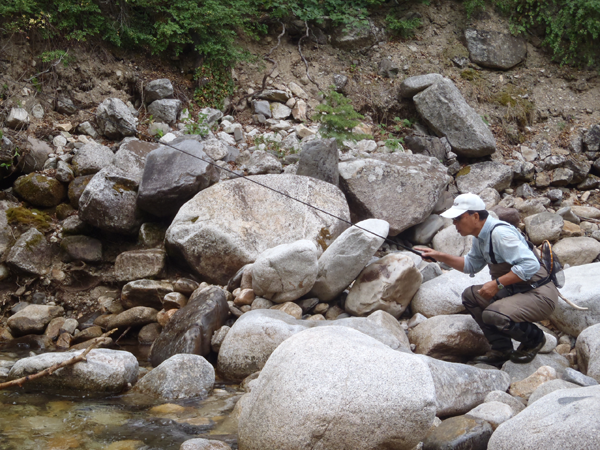 When I fished with Dr. Ishigaki at Last year’s Tenkara Summit, the first thing that struck me about his style was his laserlike concentration. As soon as he locked his sights on his target, you could practically feel being shut out of his world. His focus was so intense, I felt like I didn’t exist–like some force field had emanated from him and erased me from his reality. He was completely in the moment. With the constant chatter that fills our minds today, that kind of concentration is difficult to achieve. But I think it ‘s what makes a expert angler. And, I think tenkara helps.

Have you ever watched a heron stalk a fish? Their gaze is unbreakable. Every move is calculated and deliberate (as is the speed of every move). Nothing will break its concentration until it gets its fish. That is the type of concentration Dr. Ishigaki has and it is amazing to witness. I call it “being a heron”.

Of course, it’s not just gear that can distract you. The mind is usually the main culprit. As a case in point, I was fishing a pool a little upstream from Dr. Ishigaki. I didn’t catch a thing or even have any strikes. After a little while, Dr. Ishigaki came up from behind, made a few casts in the same pool, and hooked into the nice rainbow below almost immediately! 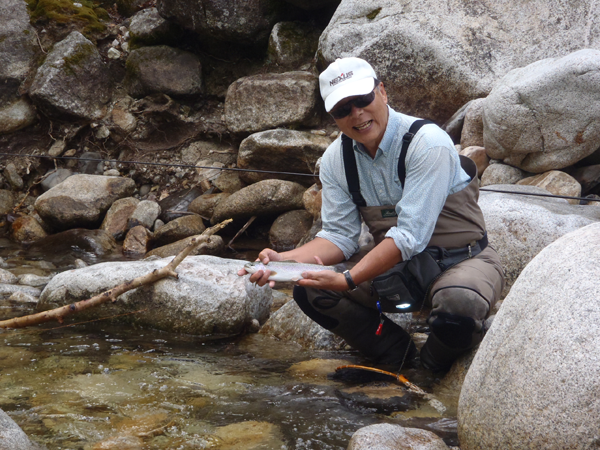 One could argue that the reason he caught that fish and I didn’t was because he’s more skilled than I am (which of course is true) or that it was the fly, the presentation, etc. But I really believe it was concentration. You see, the whole time I was fishing that pool, I was mentally distracted. I kept turning around to see if there was a good photo op of Dr. Ishigaki. I was thinking about the blog posts I would write about the Summit. About what types of videos I should get. In fact, one could say I really wasn’t really fishing at all. I was daydreaming on a stream. I wasn’t a heron.

I’m sure we’ve all had the experience of not paying attention for a couple of seconds, only to have a fish strike. Suddenly, we’re jolted back into the present when we see the flash or feel the tug on the line but by then, it’s too late. That’s an empirical lesson on the importance of concentration. It’s a lesson Dr. Ishigaki indirectly taught me that day.

One of the things tenkara anglers place a lot of emphasis on is the idea that skill matters more than gear. As Dr. Ishigaki says, “you can’t buy skill in a fly shop”. And to me, concentration is just another skill we need to hone if we want to be masterful tenkara anglers (or any type of angler for that matter).

tenkaratenkara fishing
About the author