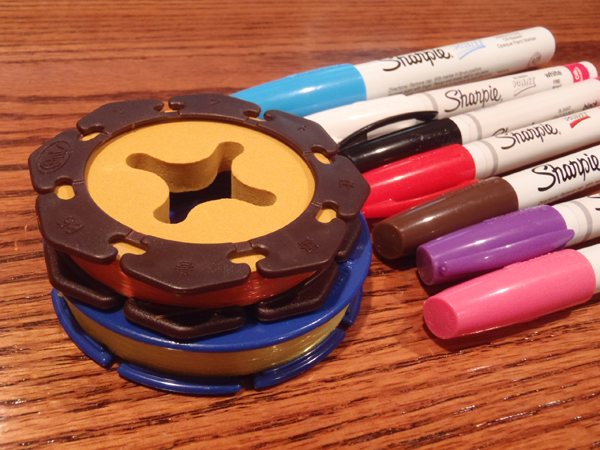 If you’re anything like me, you’ve accumulated a bunch of level lines that live in anonymity.  You’ve long forgotten the size and have no idea what the length is.  And they all start to look the same after a while. Rather than getting the micrometer and measuring tape out every time you uncoil a mystery line, here’s a simple system you can use to instantly identify any level line’s length and diameter.

Some of you may have seen the post I did about using paint markers to color level lines where I promised I would follow up after some field testing. I finally had the chance to test them out on the water and while the results were not what I hoped, the experiment lead to the idea I’m about to describe.

But first, about the failed experiment. The painted lines looked great in my yard but on the water, they just weren’t as hi vis as I thought. In fact, standard orange fluorocarbon or the new nymph lines from Rigs are much more visible. My tests also answered the question of durability. After only a couple of hours of casting, the paint started flaking off the line. Since it takes a fair amount of effort to paint (and repaint) a full line and they’re no more visible than naked hi-vis fluorocarbon, I don’t see any reason to pursue this idea; however, it did give me another one.

A long time ago, I wrote about a marking system to identify the diameter and length of Tenkara level lines. It involved using a Sharpie marker and color coded Dacron loops. The system was ok but had a flaw. I don’t use Dacron loops on all my lines (and many others don’t either). The marker doesn’t really take well to the fluorocarbon so I marked the loops because they absorbed the ink better. But I really wanted a way to mark the lines directly–loop or no loop. And I think the paint markers might be a better solution

The system is pretty simple and has two components. The first is color coding to indicate the line’s diameter. You could assign any color you want to each diameter but here is what I came up with:

The second component is a set of three bars of different size that indicate the line’s length. It works a little like Roman numerals–they’re combined and “added up” to calculate the length:

Below are some examples.  Can you guess the size and length of these lines?  Give it a shot then scroll down to see if you got the correct answers … 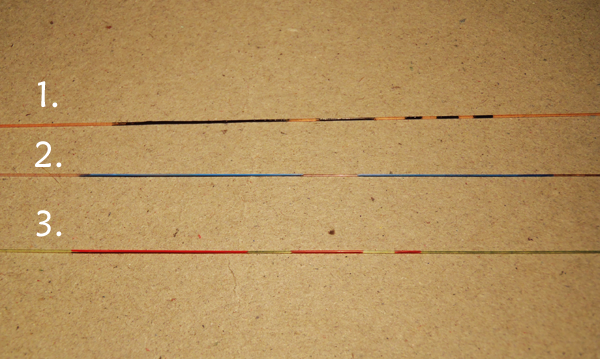 How did you do?

I think this system is a big improvement over the old one. Even though the paint will eventually wear off, it’s much easier to repaint a few inches than an entire 20 ft. line. To help the markings last longer, I make them at the end of the line where I connect it to the rod (not at the business end where you attach the tippet). This part of the line receives less wear and tear than the tip and is the section you wrap last on the spool so is more accessible (otherwise, you’d have to unwind the entire line to find out what it is).

You might ask why I don’t just mark the spool rather than the line and just dedicate one spool for each line. The reason is that I have many more lines than spools and sometimes I store them off the spool in a plastic bag. Plus, spools get mixed up and any AWOL line not on a spool could not be identified. Therefore, I think it makes more sense to mark the lines directly.

So far, I like this system.  But everything can be improved and I’m sure it will evolve again.  And when that happens, I’ll be sure to let you know.

How do you track & ID your level lines?